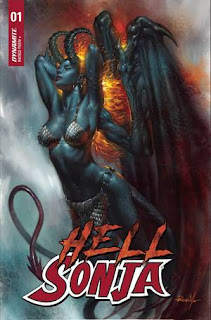 Red Sonja remained a fixture in comic books from then until about 1986.  In 2005, Dynamite Entertainment began publishing comic books featuring differing versions of the character.  One of those is a spin-off title, Hell Sonja.  The series is written by Christopher Hastings; drawn by Pasquale Qualano; colored by Kike J. Diaz; and lettered by Jeff Eckleberry.  The series finds Hell Sonja and company filling Hell's belly with would-be conquerors.

Hell Sonja #1 finds that the god that ruled Hell is dead, but Hell still hungers.  Now, the champions of the dead god are filling the belly of Hell with those most deserving of punishment.  Hrodulf, Usher of Doom and his henchman, Firmen, Sorcerer of Perversion, are deserving.

Enter Red Sonja, Blue Sonja, Moon Sonja, Gold Sonja, and Purple Sonja.  They are bound together by Hell Sonja, the Queen of Damnation.  If someone so wicked is beset upon you, if you're desperate enough, if no one else can help, maybe your prayers will be heard by Hell Sonja!

THE LOWDOWN:   In July 2021, Dynamite Entertainment's marketing department began providing me with PDF review copies of some of their titles.  One of them is Hell Sonja #1, which is one of several Red Sonja-related comic books that I have read

Hell Sonja is the follow-up to the Sonjaversal comic book series with the same creative team.  I think that this first issue is merely an introduction to the basic concept.  So far, Hell Sonja #1 seems like Sonjaversal with a new title, but I'm curious to see where this goes.  I don't have more to say about it at this point, but I'll see what happens next.

Posted by Leroy Douresseaux at 4:45 PM