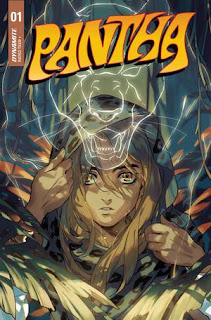 Pantha was a Warren Publishing comic book character who was an adversary of classic Warren character, Vampirella.  She began as an alien shapeshifter from Vampirella's native planet, and she could morph into a black panther.  Pantha first appeared in Vampirella #30 (cover date: January 1974).

Pantha's origin was rewritten and she became an ancient Egyptian queen who was cursed by the goddess, Sekhmet, because of the murders she committed.  Pantha must walk the world forever, trapped between the forms of human and panther.  She will never know home or peace, burdened by the fury of a goddess and the rage of the innocents she ordered slain.

Pantha, like Vampirella, is now belongs to Dynamite Entertainment, which gave the character her own six-issue miniseries in 2012.  Pantha returns in a new comic book series, entitled Pantha Volume 2.  It is written by Thomas Sniegoski and Jeannine Acheson; drawn by Igor Lima; colored by Adriano Augusto; and lettered by Dezi Sienty, Carlos  M. Mangual, and Taylor Esposito.

Pantha Volume 2 #1 opens two months prior to the main story aboard Tikhon Airlines Flight 1075, somewhere over the Baltic Sea.  The “Children of Ta-Nakht” holds the flight and the passengers hostage, which is just the beginning of the diabolical plans.

In present day, Toortooga, Florida.  Pantha resides at the Toortooga City Zoo as a six hundred pound black panther, hiding away from the world.  She is plagued by her ancient past when she was Maatkar Samira, living in Thebes, Egypt, as the queen to Pharaoh Diogenes Hamset II.  In 1458 B.C., Samira envied the peasant girl, Tarin, who gave the king what she could not, a male heir.  Summoning the goddess, Sekhmet, protector of the pharaohs, Samira commits a series of unforgivable sins.

Now, Pantha has a chance for redemption.  Someone or something is killing the Egyptian gods, and it falls upon Pantha to save the pantheon.  In exchange for her help comes the promise of redemption and freedom from her curse … a redemption and a freedom that come with a cost, of course.

THE LOWDOWN:  In July 2021, Dynamite Entertainment's marketing department began providing me with PDF review copies of some of their titles.  They recently provided me with a PDF for Pantha Volume 2 #1, which is only the first Pantha comic book that I have read.

Pantha Volume 2 #1 is easily one of the best first issues that I have read in the last few months.  Writers Thomas Sniegoski and Jeannine Acheson just freaking kill it.  I mean there is enough good stuff in this first issue alone to create at least four more series.  Sniegoski and Acheson sold their souls to write this first issue, and they more than got their money's worth.  There is no way the second issue can sustain the high level of this first issue.  If these writers kill that second issue, then, clearly there will be a need for some occult investigating.

Speaking of soul-selling, artist Igor Lima is excellent.  His storytelling had me flipping pages until I nearly climaxed at the end.  If I smoked, I would already be on my second cigarette.  Adriano Augusto beautifully colors Lima's art with museum-quality results.  This comic book is so awesome that it needs three amazing letterers:  Dezi Sienty, Carlos  M. Mangual, and Taylor Esposito.

Don't walk.  Don't run.  Drive like a maniac (without causing an automobile accident) to your local comic shop and get Pantha Volume 2 #1.  Or calmly visit comiXology and read a digital version.

Posted by Leroy Douresseaux at 2:40 PM