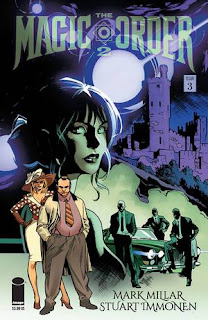 A second six-issue miniseries, The Magic Order 2, has arrived.  It is written by Mark Millar; drawn by Stuart Immonen; colored by Sunny Gho and David Curiel; and lettered by Clem Robins.  The new series focuses on a magical turf war between The Magic Order and a group of Eastern European warlocks whose ancestors the Order once banished.

The Magic Order 2 #3 opens in Romania, one thousand years ago.  The first of the Moonstones leads a band of wizards from the thirteen corners of the Earth against the dark wizard, Soren Korne.  Their victory against him – a twist of fate involving a creature known as “Othoul-Endu” – changed the world for humanity.  The Magic Order was born, and it made the bad things go away.

Back in the present, Korne's descendant, Victor, has gathered his forces, and they are making their move to retrieve the pieces of the Stone of Thoth, a talisman from ancient Egypt that summons anything from space, time, and beyond.  Standing in their way is The Magic Order … and standing in the way of the Order is one of their own, the troubled wizard, Francis King!

THE LOWDOWN:  In the wake of the Black Wedding, as seen in The Magic Order 2 #2, I was ready to go deeper into the sequel to my favorite Mark Millar written, creator-owned comic book, The Magic Order.  Of course, this third issue does not disappoint.

One of the many things that Millar does supremely well as a comic book writer is make his characters, the good, the bad, and the depraved, engaging.  It is one thing to fashion personalities for fictional characters that are the good guys.  It is quite another to make even the most despicable villains have motivations that feel genuine to the readers – even if those motivations are … also despicable.

If The Magic Order is really like a blend of Harry Potter with a Martin Scorsese mob film, the series needs comic book artists whose storytelling chops are strong enough to make The Magic Order more than that.  Here, there are dark arts families that are as ruthless as a mob family, and the magic is as big as anything found in Harry Potter media.

What Stuart Immonen brings to this mix is power and scope.  Whatever he presents on the page, he imbues with the sense that there is more.  He makes the masters of the dark arts characters malevolent and malignant rather than simply being evil.  And what about the struggle of the heroes?  Well, it's worse than it looks.  The good guys may be powerful, but Immonen depicts that struggles and troubles as ever bigger.  I've been reading comic books so long, and Lord, it is good to know that there are still artists that can grab my imagination and sweep the cynicism and cobwebs away.

Seriously, what Millar and Immonen are delivering in The Magic Order 2 would scare mobsters and make boy wizards pee their pants.  If you aren't reading The Magic Order 2, dear readers, your pull list is out of order.  And you don't need to be a wizard to fix this pitiful situation.

Posted by Leroy Douresseaux at 3:47 PM