Review: Tom and Jerry: Robin Hood and His Merry Mouse 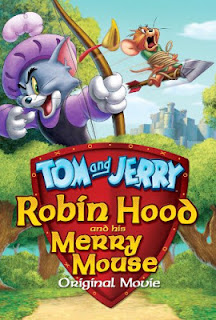 Tom and Jerry: Robin Hood and His Merry Mouse is set in a time similar to the High Middle Ages. Prince John (John Michael Higgins) rules England while his brother, King Richard the Lionheart (Clive Revill), is out of the country fighting in the Crusades. Living in Sherwood Forest, Robin Hood (Jamie Bamber) and his Merry Men rob the rich of their coin and treasure and give that loot to the poor.

The Sheriff of Nottingham (Charles Shaughnessy) is determined to capture Robin Hood and tells his boss, Prince John, that he believes that Robin has a spy in the castle. The Sheriff sends his cat-at-arms, Thomas Cat, to capture the spy. Tom catches Jerry Mouse attempting to contact Maid Marian (Grey DeLisle), who is secretly romancing Robin. Thus, cat and mouse begin their small, private war. When the scope of Prince John’s schemes are revealed, however, enemies may have to become friends in order to save both the throne and England.

I didn’t expect much of Tom and Jerry: Robin Hood and His Merry Mouse, but it turned out to be rather entertaining. The art direction for the animation is just a little on the high side of the work that appears in direct-to-DVD productions from Warner Bros. Animation. A faux-musical, the movie’s songs are good. Actually, the songs are surprisingly good, a little better than I would expect of a straight-to-video cartoon.

By the time, Tom and Jerry: Robin Hood and His Merry Mouse ended, I would have enjoyed a little more, so I’ll recommend it to those who have seen other Tom and Jerry DVD movies.