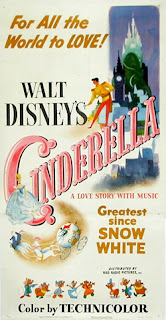 ANIMATION/FANTASY/COMEDY/FAMILY with elements of romance

The subject of this movie review is Cinderella, a 1950 animated fantasy film from Walt Disney Productions. Based on the fairy tale “Cendrillon” by Charles Perrault, it is the twelfth film in the Walt Disney Animated Classics series.

After her father dies, Cinderella (Ilene Woods), a gentle-hearted girl, faces the jealousy and spite of her wicked stepmother, Lady Tremaine (Eleanor Audley), and her two harpy stepsisters, Drizella (Rhoda Williams) and Anastasia (Lucille Bliss). Cinderella’s friends include a half-dozen mice that do constant battle with Lady Tremaine’s malevolent cat, Lucifer (June Foray). Salvation comes when The King (Luis Van Rooten) declares a palace ball to celebrate the homecoming of his son, The Prince (William Phipps), and he decrees that every eligible maid (unmarried young woman) in the kingdom attend. However, Cinderella’s stepmother doesn’t want her to attend, but a small army of friendly mice and birds and Cinderella’s benevolent Fairy Godmother (Verna Felton) makes sure she can. This magical tale includes many tunes to which the viewer can hum along including “A Dream is a Wish Your Heart Makes,” “So This is Love,” and inimitable “Bibbidy, Bobbidy-Boo.”

Cinderella was Walt Disney Feature Animation’s 12th feature film. It was, at the time, the first full-length animated feature for Disney since 1942’s Bambi, because box office and wartime cutbacks had reduced the studio’s feature film output to package films like Make Mine Music and Fun and Fancy Free, which were made of two or more short films with bridging sequences. Also, according to animator Marc Davis, 90 percent of Cinderella was done in live action before it was animated.

Cinderella comes perhaps at the end of Disney’s “Golden Age” and the beginning of period in which its films received less critical praise. Cinderella retains some of the illustrative and technical aspects that marked Disney’s pre-WWII films (like Bambi and Fantasia) as the pinnacle of hand-drawn animated features. Cinderella’s background paintings, art direction, and sets befit a film with themes of royalty and class distinctions. Most of the animation is geared towards funny animal slapstick comedy. The scenes with the mice, birds, Lucifer the cat, and Bruno (James MacDonald) the dog, etc. reflect the sensibilities of the sketch and gag comedy prevalent in Looney Tunes cartoon shorts featuring Bugs Bunny and Yosemite Sam. The scenes with The King and The Grand Duke (Luis Van Rooten) depend of comic timing between this comical duo, and that reflects the influence of Tex Avery’s cartoons.

The story of course is based on the fairy tale, Cinderella, primarily the version of the story told by Charles Perrault, the 17th century French author who laid the foundations for the literary genre that would be known as “fairy tales.” Disney’s version is a funny, warm-hearted romance that appeals across age categories. The voice acting plays as much a part as the animation in making Cinderella such an outstanding film. The actors make this a palatable and convincing drama when the comic half of the cast isn’t in control. The filmmakers simply do a magnificent job in bringing a film that appeals so much to the heart and to the funny bone and that dazzles with its production values.

There are so many memorable sequences. The birds and mice working in unison to make Cinderella’s dress are magical. The transformation of the animals and pumpkin into an enchanted carriage for Cinderella is a sparkling dream, and Cinderella’s dance with The Prince (who is never referred to in the film as “Prince Charming”) is certainly one of the most lyrically romantic moments in cinema history. The beauty of the animation and story combined with stellar Tin Pan Alley songs make Cinderella a true Walt Disney classic and a classic of American filmmaking.

Posted by Leroy Douresseaux at 6:42 AM