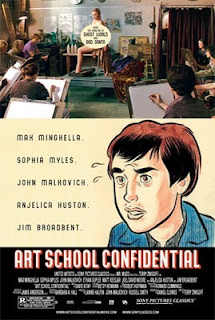 COMEDY/DRAMA with elements of romance

The subject of this movie review is Art School Confidential, a 2006 comedy-drama from director Terry Zwigoff. The film is based on a four-page comic book short story written and drawn by Daniel Clowes and published in Clowes’ comic book series, Eightball #7 (Fantagraphics Books). Clowes wrote the screenplay for Art School Confidential, the second film collaboration between him and Zwigoff. Zwigoff directed and Clowes wrote the screenplay for Ghost World, a film based on a Clowes graphic novel.

In Art School Confidential, an ambitious art school student tries desperately to get the girl of his dreams, but she’s attracted to a dumb jock type whose simplistic pop art paintings have taken the art class by storm. This the second film from the team of Terry Zwigoff and Daniel Clowes that gave us the Oscar-nominated, Ghost World. Clowes is a comic book artist, and Art School Confidential, like Ghost World, is adapted from his comics.

Jerome Platz (Max Minghella) wants to be the greatest artist of the 21st Century, and to that end he escapes his suburban home and terrible high school to a tiny East Coast art school, the Strathmore Institute. However, the beauty and craft of his portraiture does not win him any friends among his fellow students in the anything-goes art class. He finds this new world filled with a collection of offbeat characters: his worldly, but obnoxious classmate, Bardo (Joel David Moore); a roommate exploding with the desire to make a cinematic masterpiece of blood and violence, Vince (Ethan Suplee); his self-involved art teacher, Professor Sandiford (John Malkovich); and a failed artist and Strathmore grad who is drowning in alcohol and self-pity, Jimmy (Jim Broadbent).

Jerome does find his eye drawn to the girl of his dreams, Audrey Baumgarten (Sophia Myles), an artist’s model (who models nude for Jerome’s class) and daughter of an acclaimed artist. Audrey is initially attracted to Jerome, whose attitude is refreshing and not like the affectations of the local art crowd. However, a fellow art student and jock-type named Jonah (Matt Keeslar) becomes the toast of the art school with his pop art paintings. When Audrey turns her attentions to Jonah, Jerome concocts various plans to win back her affections, which all fail, but his next one will put Jerome’s future at stake, as well as the lives of those in and around Strathmore.

While Art School Confidential comes across as a satire of art schools, the faculty, and students, it is also a love story and youth relationship drama. It works well as all three. As a work of satire, Clowes’ script is matter-of-fact about art school politics. All his characters exist more in their own worlds than they do in the larger world in which they also co-exist, whether or not they believe they do. It seems as if they tolerate people and desire others attentions mostly so others should validate their art, agendas, and careers.

As for the romance and drama: Max Minghella certainly makes Jerome Platz a likeable underdog for whom we root. He may a bit aloof and may be naïve in terms of his expectations, but he’s honest and his ignorance and rudeness are endearing. We want him to get the girl, and we love the girl, too. Sophia Myles plays Audrey, the object of desire, quite well – mainly because she’s an “It” girl with that kind of classic look that works so well in film.

Still, the question that’s on everyone’s mind, “Is Art School Confidential funny?” I thought it uproariously funny, although it goes dry at the beginning of the last act. Clowes views humanity with a sanguine eye, even when his work seems cynical. His comics are matter-of-fact about humanity – warts and all. He may privately pass judgment, but in his comics, he lets the reader make up his own mind. His movie writing is like that, and Zwigoff is adept at picking up both the subtle nuances and broad strokes of his screenwriting collaborators. That allows Zwigoff to spend his time letting his talented cast have fun with the script and story. The result is fun, even exceptionally good flicks like Art School Confidential.

Posted by Leroy Douresseaux at 8:40 AM