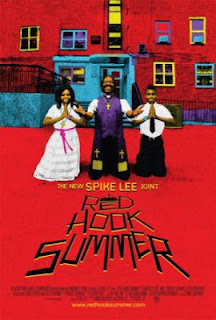 Red Hook Summer is a 2012 drama from director Spike Lee. The film follows a middle-class boy from Atlanta, spending the summer with his grandfather in Red Hook, a neighborhood in the New York City borough of Brooklyn.

Flik hates staying in the Red Hook housing projects, where he runs afoul of a local drug dealer named Box (Nate Parker). Still, he makes a friend in sassy teen girl, Chazz Morningstar (Toni Lysaith), and the youngsters spend their days and nights arguing about life and spiritual matters. This Red Hook summer is not free of troubles, as dark secrets suddenly come forth. Who are Bishop Richard Benjamin Broadnax and Blessing Rowe?

First, some trivia: Red Hook Summer is the first time Spike Lee has acted in one of his films since 1999’s Summer of Sam. Lee also reprises the role of Mookie, the lead character in Lee’s 1989 film, Do The Right Thing, for this movie.

Red Hook Summer is a quality film, but suffers from being uneven and rough. Spike Lee’s films are at their best when the director is being confrontational and when he can pluck nerves and tweak prevailing attitudes, conventions, and traditions, as he did in Do The Right Thing. For most of its runtime, Red Hook Summer wears its low-budget, indie production values on its sleeves, and it is less confrontational and more quarrelsome. It’s not that this film looks cheap; it just looks like every other indie drama set off the beaten path in some average, lower working class or impoverished burg/neighborhood.

Except for a few moments, some snippets of dialogue, and a soliloquy here and there, Red Hook Summer does not offer sustained fire, passion, and conflict (or obstacles). There is an explosive change with forty minutes left in the movie. Even at that point, Lee allows the film’s real drama and conflict to go unresolved or even conferred upon. Essentially, the best of Red Hook Summer does not happen until the movie’s last act. WTF, indeed! The drama is just getting started as the movie is just starting to end.

The film is rather inelegant about its most confrontational and didactic aspects and elements. The acting is often stiff, the dialogue only a little less so. Still, Red Hook Summer has something many other movies lack, a sense verisimilitude.

Watching it, the movie felt real to me. It has weight, substance, and depth, in spite of its deficiencies. Spike Lee does what he does best – get on the streets and turn those streets into burly, fleshy drama. In a landscape of big, loud, expensive movies made all the more unreal by various computer and technological enhancements, Red Hook Summer keeps it real. It is impossible to ignore, and that’s a good thing.

Posted by Leroy Douresseaux at 6:57 AM