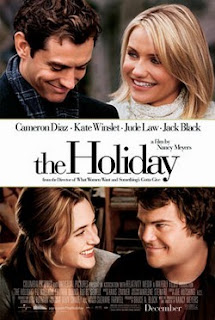 The subject of this review is The Holiday, a 2006 romantic comedy film from writer-director, Nancy Meyers. This Christmas/Holiday-themed film focuses on two women who trade homes after each suffers some romantic heartbreak.

Two women who live 6000 miles apart and have never met find their lives in the same place. In Los Angeles, Amanda (Cameron Diaz), who directs movie trailers, realizes that her live-in lover, Ethan (Edward Burns), has been unfaithful. In London, newspaper writer Iris (Kate Winslet) has been in love with Jaspar (Rufus Sewell) for three years, and now he’s about to marry someone else. Amanda and Iris meet online at a home exchange website and impulsively switch homes for the (Christmas) holiday.

Nancy Meyers, writer/director of the delightful chick flick Something’s Gotta Give, delivers The Holiday, another fluffy film confection best served on a holiday winter evening. After an awful start in which Kate Winslet babbles a dry opening narration, The Holiday rights itself with lovable characters. To that end, the four leads don’t so much deliver great performances as they deliver great big dollops of charm every time they appear on screen.

The Holiday plays to the female audience, but this is also the kind of pure gooey entertainment that, during the holidays, can ensnare the unsuspecting heart of any guy who is a romantic at heart.