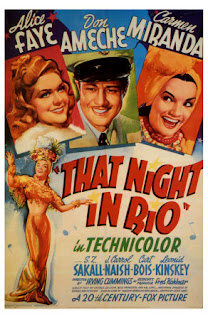 20th Century Fox opened up its film vaults back in early 2007 and released several of its musicals from the 1930’s and early 1940’s on DVD, including the 1940 musical/comedy/romance, That Night in Rio (released separately and as part of the four-film The Alice Faye Collection boxed set). The movie’s original tagline “Have a rendezvous with music and gaiety,” is truth in advertising.

Actor/club owner, Jimmy Martin (Don Ameche) and aristocratic airline businessman, Baron Manuel Duarte (Don Ameche), are practically identical twins. When the Baron leaves town to fix a risky business deal, his partners hire Martin to stand in for the Baron. Not knowing that Martin has replace her husband, the Baroness Cecilia Duarte (Alice Faye), finds her philandering husband suddenly more attentive to her. The Baroness later learns that an impersonator has playing her husband, so she decides to have a little fun of her own. When the Baron returns and Martin’s wife Carmen (Carmen Miranda) learns of the scheme, the fun gets a lot more complicated.

That Night in Rio is set in an idealized Rio, Brazil of lavish nightclubs and bouncy samba music. Like many musicals, That Night in Rio was filmed in Technicolor, the film color process known for its hyper-realistic saturated colors. In fact, it exemplifies why Hollywood was then called the “Dream Factory.” The sumptuous production values, gorgeous wardrobes, and opulent sets (all in vivid color) must have looked like heaven to early 1940’s America, which was still working its way out of the Great Depression and living with an increasingly ugly war in Europe that would soon engulf this nation.

This movie opens with a bang, as sparkling fireworks effects over a matte painting give way to Carmen Miranda belting out “Chicka Chicka Boom Chick,” which is but one of several fantastic musical numbers in this film. In fact, Miranda, who became an icon for some and a stereotype for others, enlivens this film, with the able assistance of her band, Bando da Lua. Ostensibly an Alice Faye vehicle, That Night in Rio belongs to the suave and very talented Don Ameche, playing the duel roles of Jimmy Martin and Baron Duarte. Although the film’s screenplay eventually becomes twisted in all this identity switching, Ameche (who would win a supporting actor Oscar for Cocoon 45 years later) makes it go down quite smoothly, and he makes what could have been a merely entertaining flick, a very good movie. People who love old time musical comedy may very well want That Night in Rio to never end.