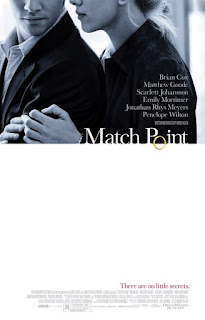 DRAMA with elements of romance and thriller

The subject of this review is Match Point, a 2005 dramatic thriller from director Woody Allen. The film was originally to be set in the Hamptons, but the setting was changed to London because the financing for the film came from sources based in the United Kingdom. Match Point follows a former tennis pro and his volatile relationship with a femme fatale.

Chris Wilton (Jonathan Rhys-Meyers), a tennis pro who recently left the professional ranks, takes a job as a tennis instructor at a high society social club near London. There, he meets and strikes up a friendship with Tom Hewett (Matthew Goode), the only son of a wealthy family from the British upper crust. Chris also meets Tom’s fiancé, Nola Rice (Scarlett Johansson), this movie’s femme fatale (so to speak) and an American actress struggling with her career in London. Chris also attracts the eye of Tom’s sister, Chloe (Emily Mortimer), who is immediately attracted to Chris. Chloe practically throws herself at Chris, but it has benefits. Tom and Chloe’s father, Alec Hewett (Brian Cox), a very wealthy and highly connected businessman, takes an immediate liking to Chris. Before long, Alec’s connections have landed Chris a cushy business job, and Chris social climbs his way to improved social status and finances, especially for a man who grew up a poor Irish boy. Chris marries Chloe. However, Chris is infatuated with Nola, and they have an affair that lasts even after Tom’s dumps her, and Nola is a very demanding woman. She wants Chris to leave Chloe for her, and Chris begins to wonder if violence is the only way out of his predicament.

Woody Allen earned his fourteenth Oscar nomination for screenwriting (more than anyone else and all of them “Written Directly for the Screen”) with his only film shot entirely in Great Britain, Match Point. Match Point, also his longest film, is almost the typical Woody Allen film except that this is a straight drama with no comedic elements (one of the few times he’s done that and the first time since the late 1980’s). As per usual, there is a philandering husband and a mistress, but the mistress Nola’s rage has an edge to it that a comic narrative would temper. There are class differences among the characters, except the disparity here between the pair of Chris and Nola and the Hewett’s is a chasm. There is an unhappy marriage, except in this film the husband is totally to blame and an idiot. Chloe is great to Chris, and she and her family throw wealth and privilege at him that could have easily gone to someone who was already in Chloe’s social set. Finally, Allen, as always, discusses philosophy in his movie, but in the case of Match Point’s drama, the philosophy isn’t meandering. Chris’ belief that luck is more important than hard work, as important as he believe hard work indeed is, defines this film. There’s no mock comic philosophizing here as there sometimes is in an Allen movie.

The acting is good, but not great. I’ve come to accept that Scarlett Johansson is beautiful (though not “classically” beautiful), and that while she looks good on the screen, she doesn’t have major acting chops. Her best acting is done with her face and not with her voice, in particularly delivering dialogue. She also has zero chemistry with Jonathan Rhys-Meyers in this flick, and their passion has a hollow ring – an almost fatal flaw in the film. Match Point, however, is predicated on some of Woody Allen’s strengths: intimate character drama and constructive dialogue that moves the narrative and reveals character and motivation.

For Woody Allen fans, this is a rare treat – a Woody drama. For everyone else, Match Point is Fatal Attraction with a bit more brains and less glossy exploitation, but it’s still full of tawdry fun.

Posted by Leroy Douresseaux at 8:23 AM