"The Return of the King" a Crowning Achievement 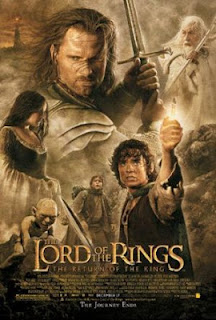 The Rings trilogy ends with The Lord of the Rings: The Return of the King, a magnificent epic of war, romance, honor, loyalty, and salvation. Although I view it as the least of the three films, ROTK is quite entertaining – at many moments, spectacularly so. Anyone who loved the first two pictures will certainly love this finale.

Most of the former Fellowship of the Ring: the man who would be king Aragorn (Viggo Mortensen), the elfin archer Legolas (Orlando Bloom), the wizard Gandalf (Ian McKellan), Gimli (John Rhys-Davies), and the Hobbits – Pippin (Billy Boyd) and Merry (Dominic Monaghan) gather in preparation for the final battle in the defense of Middle Earth. They join the people of Rohan to aid Gondor in a ferocious battle to save the human royal city of Minas Tirith. Meanwhile, Gollum leads the other two hobbits – Sam (Sean Astin) and the bearer of the One Ring, Frodo (Elijah Wood), to Mount Doom. The Hobbits are unaware of the treacherous path upon which Gollum leads them; he is the former owner of the One Ring and seeks to destroy the Hobbits so that he may regain possession of the Ring. As Frodo and Sam approach Mount Doom, the birth place of the Ring and the only place where it can be destroyed, the good guys gather at the Black Gates for a battle against the bad guys as the evil eye of Sauron searches for the One Ring, the object that will restore Sauron to Middle Earth.

Although ROTK is certainly a fine film, it has an air about it of being a story that’s run too long. Much of what makes The Lord of the Rings so endearing, the pageantry, the epic scope, the romantic soliloquies, the grand battles, the sweeping score, and the lead characters love for one another slowly creep towards self-parody. Thrilling speeches seem flat; fascinating fantastical creatures become comical. That maybe one reason director Peter Jackson cut the film to three hours and 20 minutes, as an earlier cut of the film had reportedly crept close to four and half hours in length.

Because the film story’s is so wonderful and engaging, I can overlook the flaws as ROTK wraps up LOTR. All aspects of the filmmaking is, for the most part, either excellent or very good: directing, acting, script, score, photography, visual effects, costume and set design. The one really great element of the film is it’s editing; that is what holds the film together even in the moments when it starts to tread the fine line between sublime and pure ridiculous.

Posted by Leroy Douresseaux at 9:25 AM