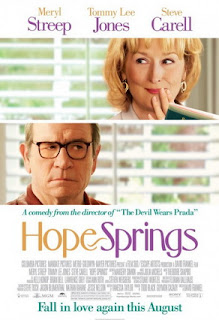 Hope Springs is a 2012 romantic comedy-drama from director David Frankel. The film focuses on a married couple in therapy.

Kay (Meryl Streep) and Arnold Soames (Tommy Lee Jones) have been married for thirty-one years. Kay believes that they are in need of help to put the spark back in their marriage. She enrolls them in an intense, week-long counseling session with Dr. Bernard Feld (Steve Carell). The couple travels to a coastal resort town in Maine where Feld’s Center for Intensive Couples Counseling is located. But Arnold isn’t cooperative, and Kay learns that the couple’s problems aren’t necessarily one-sided.

Hope Springs is interesting simply because it is a romance about old people will to talk about their lusts and sexual fantasies, or at least struggle with the implications of denying them. Heck, any movie in which Tommy Lee Jones plays a character who admits how much he wants oral sex from his wife is worth watching. Seriously, folks: there is some fine acting here. Streep and Jones create a couple in a deep rut so convincingly that I found myself feeling really sorry for them. Without being explicit, both actors construct sex scenes that are as raw and intimate as they are clumsy and forlorn. Yeah, I was invested in the Soames’ working out their marital issues.

Unfortunately, Steve Carell is reduced to being basically a talking head, although I strangely found him believable as a marriage counselor or therapist. His character always felt restrained, as if Carell was fighting to break free of some invisible bonds forced on him by the narrative. For what little he does, any good actor without Carell’s fame could have delivered the same performance Carell does.

Also, this film has a terrible soundtrack; it almost ruins the movie.

Still, I recommend this film to fans of Streep and Jones. Honestly, you won’t find acting this good, in which both characters have this level of depth, in many romance films. Hope springs that there are more movies like Hope Springs... but with a better soundtrack.