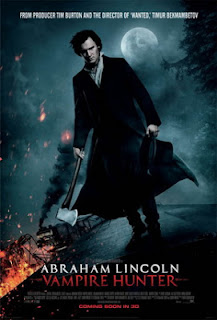 Young Abraham Lincoln (Lux Haney-Jardine) saw his mother killed by plantation owner, Jack Barts (Marton Csokas), who turned out to be a vampire. Adult Abraham Lincoln (Benjamin Walker), obsessed with avenging his mother’s death, meets Henry Sturges (Dominic Cooper), who is bursting with knowledge about vampires. Henry becomes Lincoln’s vampire hunting mentor and teaches him the fine art of slaying vampires. Law student by day and vampire slayer by night, Lincoln draws the attention of Adam (Rufus Sewell), a powerful vampire leader and owner of a plantation deep in Louisiana.

After meeting his wife, Mary Todd (Mary Elizabeth Winstead), Lincoln moves on to a life in politics. He keeps a tiny inner circle around him: William “Will” Johnson (Anthony Mackie), a young black man Lincoln knew as a child, and Joshua Speed (Jimmi Simpson), Lincoln’s former employer. As the Civil War rages, however, Adam and his order play a large role in the bloodshed, forcing Lincoln to make it his mission to eliminate the vampires before they take over the nation.

When I first saw Quentin Tarantino’s Inglorious Basterds back in 2009, I was put off by the wild liberties with real-world history that this alternative historical film took. But thanks to Tarantino’s film, I had fewer misgivings about the ersatz history in Abraham Lincoln: Vampire Hunter. I still cringed at some historical inaccuracies, but not nearly as much as I did with Inglorious Basterds.

With that out of the way, I can say that Abraham Lincoln: Vampire Hunter is the best Civil War vampire movie that I’ve ever seen, and it is one of the best movies that is in whole or in part about the Civil War / War Between the States that I’ve seen. If anything, it certainly cements Timur Bekmambetov’s place as an imaginative and inventive architect of special-effects-wrought action sequences.

I do think that the cast gets much of the credit for keeping this historical epic-meets-monster movie from devolving into a joke. Benjamin Walker is surprisingly good as Lincoln, no mean feat in a year when Daniel Day-Lewis is also portraying Lincoln in a film. Rufus Sewell and Marton Csokas hit the right big-budget, B-movie monster notes as vampires. And I must give Mary Elizabeth Winstead extra credit for his portrayal of Mary Todd Lincoln. She almost takes this thing entirely too seriously, but that still results in a heart-felt and spry performance.

I usually like it when a big studio, event movie takes the time to be a little subversive, and this movie is subversive and sly. Abraham Lincoln: Vampire Hunter is not only anti-slavery, but it is also anti-Confederate States of America. It in no way treats the “Southern cause” as noble or sympathetic. Vampires are equated with slave owners, and the vampire lust for human blood is equated with slave owners’ brutal treatment and exploitation of slaves for profit and gain. Although it is entirely fictional, having the Confederacy unite with a league of vampires in a vain attempt to defeat the Union makes perfect sense. Evil game recognizes evil game.

Abraham Lincoln: Vampire Hunter is in many ways silly, but it is unique and just politically daring enough to be more than just another vampire movie.