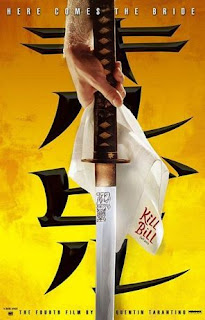 The subject of this movie review is Kill Bill: Volume 1, a 2003 martial arts and action film from writer/director Quentin Tarantino. It is the first of two films that were released within several months of each other. The film follows a character called “The Bride,” who is seeking revenge against her former colleagues.

If there was much doubt that Quentin Tarantino could still make not just good movies, but great movies, Kill Bill: Volume 1 should dispel that doubt, unless the doubters are just being contrary. That Kill Bill is one of the most violent, if not the most violent, American films ever made is very certain. Only time will tell if Kill Bill Vol. 1 is the best American action movie ever made, but it is the best and most thrilling film since James Cameron abruptly reshaped thrills and intensity of movies with Aliens.

In the film, The Bride (Uma Thurman) awakes from a coma in which she’d been in for four years. It has been four years since her fellow assassins of the Deadly Viper Assassination Squad killed her husband and wedding party at a small church in Texas. Her boss, Bill (David Carradine), however, did the honor of shooting The Bride, showing no mercy even though she was late in her obvious pregnancy. Bill’s biggest mistake was that he didn’t kill her, and now The Bride is out to Kill Bill. Before Bill, she has scores to settle with two of her colleagues, Copperhead (Vivica A. Fox) and Cottonmouth, now known as O-Ren Ishi (Lucy Liu), and a Yakuza crime boss in Tokyo.

Tarantino reportedly shot so much footage for Kill Bill that he and the studio Miramax Films ultimately decided to divide the film into two parts. One of Tarantino’s signature techniques is to juxtapose time in his scripts, dividing his films into self-contained chapters that are complete little short stories on their own. Each chapter fits in quite well with the larger film story and embellishes it so very well.

Kill Bill isn’t so much about the story as it is about the technique of making film. Tarantino basically asks his audience to go along with this long homage to Asian cinema, in particular martial arts epics and crime films. He mixes film genres with varied visual styles of films, and in that his cinematographer Robert Richardson (an Academy Award winner for Oliver Stone’s JFK) ably assists. At times, Kill Bill is totally about what the film stock looks like – the colors, the lack of color, grittiness, glossiness, etc.

This is a film geek’s film – the kind of genre film a big fan of a particular genre would like to make as well as see, and Tarantino makes it so well. Kill Bill is a grand time. For fans of martial arts films who loved the elaborate fight scenes in movies like The Matrix and Crouching Tiger, Hidden Dragon, the master fight choreographer who worked on both films, Yuen Wo-Ping, worked with Tarantino on the heart-stopping and eye-popping fights in Kill Bill.

Tarantino gets the most out of all his crew. The RZA (of hip hop act Wu-Tang Clan fame) composes a brilliant, genre-crossing, ear-bending score that recalls the sounds and tunes of classic gangster, Western, martial arts, and crime cinema classics. Shout outs also go to the art and costume departments.

Kill Bill is without a doubt great cinema about cinema, and it’s excellent entertainment. By no means perfect, it does dry up on occasion and even seems a bit long. There were also too many bits obviously thrown in to accommodate the next chapter. Still, the fault lines don’t matter because Kill Bill is so damn fine. Action movie lovers and lovers of great filmmaking cannot miss this because Kill Bill Volume 1 is that proverbial good movie about which people are always complaining Hollywood doesn’t make anymore.