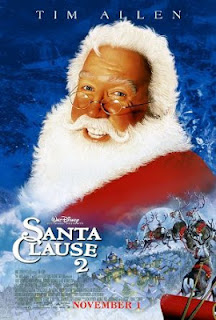 The subject of this movie review is The Santa Clause 2, a 2002 romantic comedy, fantasy, and Christmas movie from Walt Disney Pictures. It is a sequel to the 1994 film, The Santa Clause.

Scott Calvin (Tim Allen) has been Santa Claus for eight years, and his elves consider him the best ever. But The Big Guy isn’t without problems. When he starts mysteriously losing weight, he learns that there is another Santa clause – Santa must have a wife. Scott has to leave the North Pole to find Mrs. Claus, or he’ll be forced to give up being Santa. Scott leaves a scheming elf named Bernard (David Krumholtz) in charge, and Bernard promptly builds a toy Santa (played by Allen in makeup) to double for the real Santa. After reading the rule book, the toy Santa comes to believe that the real Santa isn’t doing his job right, so the mechanical St. Nick starts making changes that don’t seem right.

Meanwhile, Scott discovers a second area of trouble. His son, Charlie (Eric Lloyd), is in trouble in school and is also on Santa’s “naughty” list. A visit to Charlie’s school leads to a chance meeting with the lovely Principal Carol Newman (Elizabeth Mitchell), and Scott realizes she would make a great Mrs. Claus. Will Scott’s secrets, family strife, and Charlie’s misbehavior cost him a chance with Principal Newman? And can Scott return to the North Pole in time to save Christmas from his toy double?

The Santa Clause 2 is so top-heavy with maudlin sentiment that it’s almost crippled. The treat is, as always, Tim Allen in his 75-pound Santa suit or even dressed as an ordinary man trying to be a good father and just maybe a good husband. It’s Allen’s spin on Christmas comedy that makes this a worthwhile family flick.