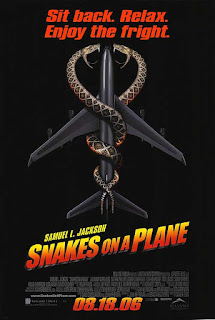 The subject of this movie review is Snakes on a Plane, a 2006 action thriller and horror film from director, David R. Ellis (the director of two Final Destination movies). The film stars Samuel L. Jackson as an FBI agent battling hundreds of deadly snakes on a passenger plane.

If you expected a campy, cult-classic-to-be, you’re getting a good movie instead (or also):

FBI agent Neville Flynn (Samuel L. Jackson) is escorting Sean Jones (Nathan Phillips), a young man who witnessed a brutal mob murder, from Hawaii to Los Angeles. However, the mobster, Eddie Kim (Byron Lawson), is determined that this never happens, so he has hundreds of poisonous snakes smuggled aboard the commercial aircraft, South Pacific Air Flight 121, in a crate timed to release its deadly cargo when Flight 121 is halfway across the Pacific. After the initial attack leaves half the passengers and the lead pilot dead, Flynn has to band the crew and survivors together in a desperate attempt to survive and land the plane at LAX.

Having sparked Internet interest since last year, Snakes on a Plane has finally arrived and it is the real deal – a B-movie that delivers. Snakes on a Plane doesn’t take itself too seriously, but it is by no means campy. It’s the kind of (relatively) low-budget action/horror/thriller that delivers breathtaking action sequences, goose flesh-raising horror, and heart-stopping thrills. The movie doesn’t have an Academy Award level script, but the concept is good, taking two things that scare many people – flying and snakes – and putting them together in a scary movie scenario. However, the script is pretty straightforward. Sam Jackson’s Neville Flynn has to get a witness to a murder from one place to another, and all he has to do is fight off mobsters and survive a Pacific flight on a wounded airplane full of aroused and aggressive snakes. Whew!

Like any good disaster movie, this script gives the film a large ensemble cast of supporting characters. Some are there to support the hero (Julianna Margulies’ Claire Miller and Kenan Thompson’s Troy). Some are there for comic relief (Thompson’s Troy, Bruce James’ Ken, and Flex Alexander’s Three G’s), and some are there just to be an obstacle to every good idea the hero or his supporters have (Gerald Plunkett’s Paul).

The two big reasons the film works so well as a kind of “popcorn” thriller is, first, director David R. Ellis. Ellis helmed the highly entertaining and grisly Final Destination 2. It was so over-the-top gruesome that it was a chill ride as much as it was a thrill ride. Ellis takes advantage of the claustrophobia of being on a plane and people’s fear of snakes. He has a variety of serpents, real and CGI, using them to kill and menace in many, many imaginative ways.

When all is said and done, reason number two that this film is good is Samuel L. Jackson, who gives this B-movie big time credibility. With his don’t-give-a-shit, don’t-give-me-shit, suffer-no-fools, no nonsense, badasssss screen persona (and apparently his real life persona), Jackson is one of the screen’s best action heroes. Only his “hue” keeps him from getting the kind of parts in mega budget action films that Nicolas Cage, Tom Cruise, and Bruce Willis get. Jackson always delivers, even in crappy movies, and this isn’t a crappy movie. Snakes on a Plane might sound like a cheesy concept, but cast and crew worked hard to make a good movie. Simply put, Jackson made sure they delivered.