The Santa Clause 3: The Escape Clause - Well, I Like It 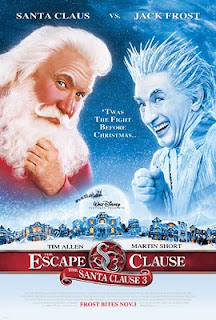 Christmas is approaching and Santa Claus (Tim Allen), the former Scott Calvin, not only has to get ready for delivering Christmas presents to children all over the world, but he and Mrs. Claus (Elizabeth Mitchell), the former Carol Newman, are preparing for the arrival of a baby Claus. At the risk of giving away its secret location, Scott invites his in-laws, Sylvia and Bud Newman (Ann-Margret and Alan Arkin) to the North Pole to be near their daughter Carol at this special time. Scott also invites his extended family: son Charlie (Eric Lloyd), ex-wife Laura Miller (Wendy Crewson), her husband Neil (Judge Reinhold), and their daughter Lucy (Liliana Mumy) for the holidays.

Scott, however, doesn’t have much time for them, as he and head elf Curtis (Spencer Breslin) have their hands full with last minute details for Santa’s magical Christmas Eve sleigh ride. Offering his assistance at this busy time is Jack Frost (Martin Short), but Jack is chillingly envious of Santa. While Santa juggles family strife and a workload crunch, Jack is plotting to change time and take over Santa’s holiday. Who amongst his extended family will help Santa save the day?

Early in The Santa Clause 3, Allen appears listless, as well as seeming burdened by the 75-pound Santa suit he wears for the title role, but Allen springs to life when facing Martin Short as Jack Frost. A shameless ham, Short is the classic entertainer, always hungry for attention – happy as a pig in mud to get applause anywhere he can, so he’s been on TV, in movies, and on stage, as well as being an animated television character. Short gives every inch of his body to the physical performance of being a sneaky and lanky villain – twisting and hunching his body and contorting his eyes as he builds the kind of gentle bad guy that would fit perfectly on Saturday morning TV.

There’s no real edge to the rivalry between Allen and Short’s characters, but they make The Escape Clause’s unyielding holiday sentiment work. The concept and subsequent script are shallow, but it’s the stars that convince us of what the story is trying to sell. Allen and Short’s battle decides the fate of the real soul of the Christmas holidays and The Santa Clause 3 – putting up with your family and accepting your place in it.

Director Michael Lembeck, a veteran of TV comedies (and the director of The Santa Clause 2), doesn’t wow us with a virtuoso display of directing, but he knows how to sell sentiment, which TV does so well. Lembeck smartly captures all the visual splendor that Disney money can buy. It’s the technical staff: director of photography, the art director and set decorator, the costume designer, and the special effects wizards and their crew that give TSC3 its visual magic. The Santa Clause 3: The Escape Clause looks and feels like a Christmas movie, and a glittery, colorful, and pretty Christmas flick, at that. For a little under two hours, this movie fooled me into believing that on a mild day in mid-Autumn, I was really home at the North Pole for Christmas. I can’t ask a Christmas movie for anymore than that.

Posted by Leroy Douresseaux at 5:48 AM