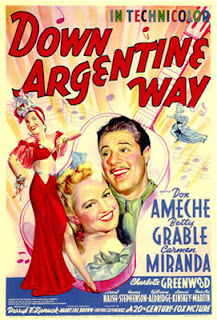 20th Century Fox opened its vault back in early 2007 and released several of its delightful Technicolor movie musicals on DVD, including the 1940 film, Down Argentine Way. In the film, American heiress Glenda Crawford (played by pin-up gal and girl-next-door Betty Grable) falls for Ricardo Quintana (Don Ameche), a dashing South American horse breeder.

Glenda is in Argentina to buy horses when she encounters Ricardo, the son of Don Diego Quintana (Henry Stephenson), a champion horse breeder. However, Don Diego won’t sell to Crawfords because of a long-standing feud he has with Glenda’s father. Ricardo follows Glenda back to New York to woo her with a deal for a champion jumping horse, but when that deal goes badly, Ricardo leaves.

Glenda and her aunt, Binnie Crawford (Charlotte Greenwood), follow him back to Argentina, where the new couple attempts to reconcile. The star-crossed lovers face tough odds to stay together. In between all the fussing and fighting, Carmen Miranda sings and the famous Nicholas Brothers (Fayard and Harold) perform a standout, show-stopping song and dance routine. An exciting day at the racetrack is the cherry on top.

One of the most enjoyable of 20th Century Fox’s early 40’s Technicolor musicals, Down Argentine Way is remembered for a few special reasons. It was Betty Grable’s breakthrough film, and it was also Carmen Miranda’s first film. Some will also remember Down Argentine Way for the spectacular dance sequence by the fabulous Nicholas Brothers, one of the few African-America film performers whose film appearances were not routinely edited out by theatres to satisfy racist audiences in some areas of the U.S.

After a slow first hour, Down Argentine Way comes to life after the Nicholas Brothers’ scene. Then, the wonderful comedy and thrilling dance numbers show through what is essentially a flimsy plot with stereotyped characters. Charlotte Greenwood’s Bennie Crawford, J. Carroll Naish’s Casiano, and Leonid Kinskey’s Tito Acuna add constant zany flourishes to this idealized Hollywood version of an exotic South American locale. The dazzling and colorful production values on display in this whimsical and gay musical fantasy are an example of why Hollywood became known as the “Dream Factory.”