"The Fellowship of the Ring" Still a Great Start 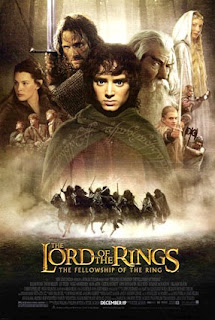 In the adaptation of J. R. R. Tolkein’s novel The Fellowship of the Ring, a hobbit named Frodo Baggins (Elijah Wood, The Ice Storm) inherits a ring from his famous uncle Bilbo Baggins (Ian Holm, The Sweet Hereafter). When a wizard named Gandalf (Ian McKellen, X-Men and Gods and Monsters), who is a friend of the family, discovers that the ring is in fact the One Ring of the Dark Lord Sauron, the ring must be taken to the place of its creation, the Cracks of Doom, the only place where the ring can be destroyed. That task falls upon the shoulders of Frodo.

Three fellow hobbits join Frodo on his quest, including one who becomes very close to him, Samwise “Sam” Gamgee (Sean Astin, Rudy). Before long the group becomes nine, a Fellowship to take the ring to the Cracks of Doom so that Frodo can destroy it. However, great evil besets them in the form of Gandalf’s mentor Saruman the White (the great Christopher Lee), who is now on the side of darkness, and his army of mighty Orcs, who serve the rings original dark owner, Sauron (voice of Sala Baker). Obstacles, great dangers, horribly evils, and death confront the Fellowship every step of their quest.

Directed by Peter Jackson (Heavenly Creatures, The Frighteners), The Fellowship of the Ring is the first of three films each released a year apart that will comprise the Lord of the Rings trilogy. Even within budget constraints, Jackson has always proved himself to be an inventive and imaginative director. Like a painter, his canvases are well planned and constructed, and he does not waste shots; every frame seems important to the larger work.

He previous experience in dark fantasy, horror, and the weird made him an ideal choice to direct a film version of Tolkein’s sprawling epic, and Jackson delivers a nearly three hour film that is both visceral and subdued. An epic as good as any every delivered by a Hollywood studio, it captures the imagination while keeping the viewer nearly unawares of its length.

Nearly, that is. It’s a bit of hubris on Jackson and on New Line Cinema, Lord’s studio, to assume that an audience will tolerate Fellowship’s abrupt ending simply because the story is “to be continued” next year. The beginning, middle, and end of LOTR’s story are actually three separate films, not one film. It isn’t that FOTR’s ending is bad, just presumptuous of our patience and acceptance that this movie is like a serial. We will have to wait over two years to get the entire story.

These are certainly minor complaints in light of what Jackson delivers. He has a fine cast of actors, and the characters that he took from the novel he has made into excellent cinematic characters. The work of his SFX group creates nearly flawless special effects shots. Using New Zealand as the Middle Earth location of the stories is a wonderful choice. Between special effects and creative camera work, Jackson has created a world that is itself a character. Jackson and his fellow screenwriters Frances Walsh (a frequent collaborator of Jackson’s) and Philippa Boyens have created an excellent script makes the battle of good and evil unambiguous and quite compelling. Although the characters’ desires and personalities may occasionally straddle a gray area, what is right is clearly defined from what is wrong. That’s always the case regardless of character motivations and goals; moral relativism is kicked to the curb.

While he has made it highly emotional and thoughtful at its heart, Jackson has also managed to make a war and action movie. He juggles genres like fantasy, comedy, drama, and war and weaves them into an epic. The movie, both its back-story and the main story, spans time, has multiple locations and environments, and has a wealth of characters. Visually pleasing and intellectual thoughtful, it is one of the best films in recent memories, a grand fantasy that captures the imagination on a deeper level (than say The Phantom Menace) like Crouching Tiger, Hidden Dragon. We can only hope that the two follow-ups are this good.