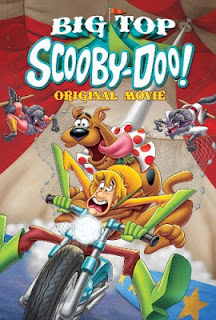 Big Top Scooby-Doo! is the 18th movie in the Scooby-Doo direct-to-video series from Warner Bros. Animation. This series began in 1998 with Scooby-Doo on Zombie Island. This new film has Scooby-Doo and company working in a circus to solve a mystery involving jewel heists and werewolves.

Big Top Scooby-Doo! finds Mystery Inc.: Shaggy Rogers (Matthew Lillard), Fred Jones (Frank Welker), Daphne Blake (Grey DeLisle), Velma Dinkley (Mindy Cohn), and, of course, Scooby-Doo (Frank Welker) arriving in Atlantic City. They’re hoping to find some monster-free fun, when they discover that the circus is in town. Not long after arriving at the camp site of the Brancusi Circus, they are attacked by a werewolf.

After rescuing them, Marius Brancusi (Greg Ellis), owner of the circus, tells the gang that the werewolf has been terrorizing his performers. The werewolf has also apparently committed a jewelry store robbery in each town in which the circus has recently performed. Desperate for help, Marius hires Mystery Inc. to catch the werewolf, but the gang will have to work incognito as circus performers. Jealous acrobats, cranky clowns, and the other eccentric denizens of the Brancusi Circus complicate the case as Mystery Inc. learns to perform circus stunts and try to unravel a werewolf mystery.

Big Top Scooby-Doo! is good, but not great and is not one of the standouts of this series. The best moments in this movie, by far, are the scenes in which Mystery Inc. performs in the circus, run from werewolves, or both. There is also an exciting chase scene finale. The action is what carries this movie, and carries it quite well.

Other than that, Big Top Scooby-Doo! is a little listless, although much of the dialogue is spry. There is also a subplot involving a heavy metal musical act called Wulfsmoon that is pointless. One of the surprises is a nicely executed feud between Scooby and Shaggy that perks up the movie every time it is brought up.

Big Top Scooby-Doo! is for the diehard Scooby-Doo fans and for youngsters satisfied with watching any kind of cartoon. However, people who have watched Scooby-Doo cartoons in the past might like some of this.

Posted by Leroy Douresseaux at 10:24 AM