"Superman vs. The Elite" a Thoughtful Superman Flick 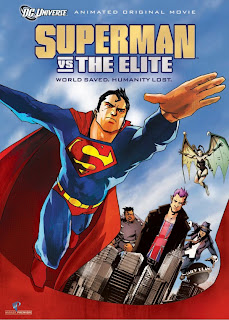 Superman vs. The Elite is a 2012 direct-to-video superhero animated film from Warner Bros. Animation. Starring DC Comics’ most famous superhero, Superman, this is also the 14th feature in the DC Universe Animated Original Movies line. Once again, Bruce W. Timm is an executive producer on the film,.

Superman vs. The Elite is loosely based on the comic book story, “What’s So Funny about Truth, Justice, & the American Way,” which was published in Action Comics #775 (March 2001 cover date). That comic book was written by Joe Kelly, who also wrote the screenplay adaptation for this movie. Superman vs. The Elite finds Superman taking on a new team of ruthless superheroes who hold his idealism in contempt and who outshine him in public opinion.

As the film begins, the world watches as the neighboring countries, Eastern Bloc nation Bialya and Pokolistan, wage war against one another. Superman (George Newbern) battles the supervillain, Atomic Skull (Dee Bradley Baker), who has gone on another murderous rampage in Metropolis. It seems as if the bad guys in the world are literally getting away with murder.

Enter a powerful new group of super-crusaders, calling itself “The Elite.” Manchester Black (Robin Atkin Downes), Coldcast (Catero Colbert), Menagerie (Melissa Disney), and The Hat (Andrew Kishino) are powerful and are willing to answer violence with violence. They are not only willing to kill on a massive scale to stop villainy, but they are also willing to make pre-emptive strikes to stop the bad guys. As The Elite’s methods become increasingly popular with the public, Superman, who refuses to kill as a matter of principle, and his methods are called into question.

Although I would not call Superman vs. The Elite one of the elite films in the DC Universe Animated Original Movies series, the film’s story does raise some interesting ideas and presents intriguing dilemmas. Superman’s approach to fighting crime and solving the world’s problems are idealistic, and, of course, that is perfect in the make-believe world of Superman storytelling media.

The Elite’s approach is also problematic, mainly because of their poor judgment, lack of discretion, and the simple fact that practically everything they do is overkill. Still, it is easy to see why people are attracted to answering extreme violence with excessive violence – an eye for an eye, indeed. The Elite’s methods would also find approval in our real world. This debate between Superman’s way of dealing with the troubles of the world and The Elite’s use of ultra-violence makes Superman vs. The Elite a little more thoughtful than the average direct-to-DVD animated movie.

The big action set pieces, mostly the fights between Superman and The Elite, are good, although the animation is a bit wonky and seems a bit too cartoony in style to fit the dark subject matter of this film. Still, Superman vs. The Elite is worth seeing.

Posted by Leroy Douresseaux at 10:08 AM