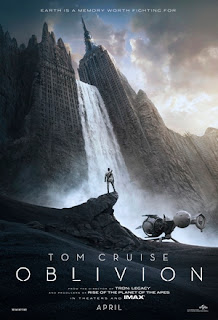 Radical Studios is thrilled to announce the online debut of the teaser one-sheet, trailer and select images of its first major motion picture: Oblivion, being released by Universal Pictures. The sci-fi epic is based on a yet to be released Radical Publishing graphic novel, original concept by TRON: Legacy director Joseph Kosinski, written by Arvid Nelson and art by Andrée Wallen.

Fans can check out the teaser one-sheet of Oblivion at http://www.ign.com and visit the film’s newly launched website at www.oblivionmovie.com, facebook page at http://www.facebook.com/oblivion and twitter at www.twitter.com/oblivionmovie #OBLIVION. On December 9, 2012 the trailer will make its online debut at http://trailers.apple.com.

Here is the official plot synopsis for the movie:
“Jack Harper (Cruise) is one of the last few drone repairmen stationed on Earth. Part of a massive operation to extract vital resources after decades of war with a terrifying threat known as the Scavs, Jack’s mission is nearly complete.

Living in and patrolling the breathtaking skies from thousands of feet above, his soaring existence is brought crashing down when he rescues a beautiful stranger from a downed spacecraft. Her arrival triggers a chain of events that forces him to question everything he knows and puts the fate of humanity in his hands."

This news comes on the heels of Radical’s recent announcement that its best-selling original graphic novel Hercules: The Thracian Wars will be adapted as a motion picture by MGM and Paramount Pictures. Hercules stars Dwayne “The Rock” Johnson and will be directed by Brett Ratner. Production is scheduled to start in early 2013.

Please visit http://radicalstudios.com/ to learn more about Oblivion, Hercules: The Thracian Wars, and the rest of Radical’s amazing library of titles. All books are available for purchase on the site as well as digitally through iTunes and Amazon.

About Radical Studios: Radical Studios is a multimedia studio centralized around a catalog of stories and characters. The company is currently focused on licensing its intellectual properties in both domestic and international markets, in physical and digital publishing, feature films, television, merchandise, recorded music, digital and online media applications and mobile and social games. Radical is represented by David Schiff of The Schiff Company and Phil Rosen of Rosen Law Group.

Posted by Leroy Douresseaux at 12:11 PM