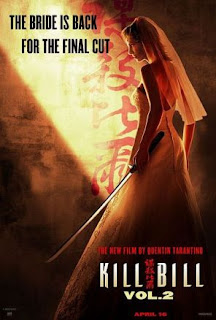 CRIME/DRAMA with elements of Action, Martial Arts, and Thriller

The subject of this movie review is Kill Bill: Volume 2, a 2004 crime drama and martial arts film from writer/director Quentin Tarantino. It is the second of two films that were released within several months of each other. The film follows a character called “The Bride,” who is seeking revenge against her former colleagues.

In Kill Bill: Vol. 2, the sequel or second half of Quentin Tarantino’s film, Kill Bill: Volume 1, The Bride (Uma Thurman) continues her mission of revenge against her former colleagues for killing her husband-to-be and the wedding party and for shooting and leaving her for dead. Most of all, she want her old boss, Bill (David Carradine); he fired the shot in her head that was supposed to kill her. But Bill has a secret named B.B. (Perla Haney-Jardine), so will The Bride be able to handle the shock of meeting B.B.?

Where Kill Bill: Vol. 1 was a stylish martial arts movie done in lively colors with the relentlessness of a revenge movie cum video game, Kill Bill: Vol. 2 is slick, crime drama – part Western and part hard-boiled novella. There’s a movie poster for a film by the late actor, Charles Bronson, used a set piece in the film, and Vol. 2 indeed has the gall of Bronson bullet ballad. Some viewers may be put off by the jarring change of pace from the first film to the second. There are very few fight scenes in 2, and they’re quite short. Only the battle between Elle Driver/California Mountain Snake (Daryl Hannah) and The Bride has the hard-edged intensity of anything near the fisticuffs of the first film.

Still, Kill Bill: Vol. 2 is an example of virtuoso filmmaking and an expert homage to many well known American film genres. Vol. 2 isn’t anywhere near as fun to watch as the first, but for those viewers who have varied tastes in films and movies and who are familiar with many film styles and techniques, Vol. 2 will be exciting to watch. As all his films have been, Kill Bill: Vol. 2 is ultimately worth watching because director Quentin Tarantino simply does so many interesting things. He’s that know-it-all film nerd who can actually make the great film he might say no one else can make, although Kill Bill Volume 2 isn’t that exactly the great film either.