"The Two Towers" the Best of the Trilogy 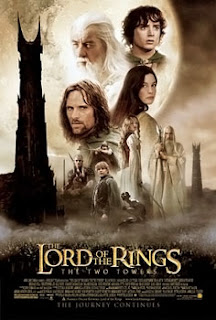 As the second installment of the Ring Trilogy, The Lord of the Rings: The Two Towers, begins, the hobbits Frodo (Elijah Wood) and his companion Sam (Sean Astin) continue alone to Mordor to destroy the One Ring, as the Fellowship (the group of heroes who were to accompany Frodo) is broken. The Uruk-hai (Orcs) have captured their fellow hobbits, Merry (Dominic Monaghan) and Pippin (Billy Boyd).

Meanwhile, the shadow of the Dark Lord Sauron spreads across the land as he hungers for the One Ring, which he once wore and that gave him great powers. Aragorn (Viggo Mortensen), the elfin archer Legolas (Orlando Bloom), and the dwarf Gimli (John Rhys-Davies) make friends with a race of humans called the Rohan. Gandalf the Grey (Ian McKellan), thought to be dead, returns as Gandalf the White. The two towers that are between Sauron’s Mordor and at the corrupt wizard Saruman’s stronghold Isengard are united in their lust for destruction.

Aragorn and his companions join the Rohan king Théoden (Bernard Hill) at the Rohan fortress Helms Deep to fend off a grand Uruk-hai army created by Saruman (Christopher Lee) to destroy mankind and Middle-earth. Frodo and Sam meet one of the Ring’s original bearers, Gollum (Andy Serkis). The creature had been stalking the hobbit pair in hopes of recapturing his “precious,” the name by which he calls the Ring, but Frodo and Sam capture Gollum and use him to lead the way to Mt. Doom, the only place where the Ring can be destroyed.

Those who liked The Lord of the Rings: The Fellowship of the Ring, the first installment, will very likely love this one as much if not more. I certainly found The Two Towers to be a superior film, which is no mean thing, as TFOTR is also a fantastic and great film. It’s an epic war story, which director Peter Jackson fills to its brim with traditional romance. In fact, it is a great romantic film, in the mold of the classic adventure films that combined intense drama or melodrama and powerful emotions.

I did find some of the special effects and computer-generated effects to be a bit weak and lame. The best SFX/CGI achievement is Gollum, who is CGI; however, Gollum actor Andy Serkis apparently acted the part out in whole – emotionally and physically. The CGI people then took his actual work and made a CGI character. Serkis also provided Gollum’s voice. Many thought Serkis was deserving of an Academy Award nomination because the CGI was “merely” copying his work, as if they simply drew over his filmed performance. Alas, Serkis did not receive a nomination.

That doesn’t matter because The Two Towers was the best film of 2002, and is arguably one of the best fantasy films ever made. Its three-hour running time goes by quickly. From TTT’s overwhelming and powerful battle scenes to the deeply, heartfelt moments between the characters, this is a film experience not to be missed, especially if you’re the kind of viewer who can understand and absorb a film of strongly fantastic elements.

Posted by Leroy Douresseaux at 9:10 AM