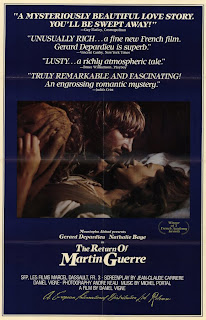 The subject of this movie review is Le Retour de Martin Guerre, a 1982 French film directed by Daniel Vigne and starring Gérard Depardieu. The film was released as The Return of Martin Guerre in the United States in 1983.

Gérard Depardieu plays a man who returns home to his village after being absent for nine years. He claims to be Martin Guerre, who left as a selfish boy (Stéphane Peau) and has returned older and also more caring towards his wife, Bertrande de Rols (Nathalie Baye), whom he abandoned nearly a decade before. The villagers, especially Martin’s relatives, have their doubts as to whether this man who claims to be Martin Guerre is really who he says he is. But when Martin stakes a claim on his rightful inheritance and property, his Uncle Pierre Guerre (Maurice Barrier) makes an attempt on Martin’s life and files a formal complaint with authorities. What follows is an intense trial that must reveal all the truths.

Le Retour de Martin Guerre or The Return of Martin Guerre may not be remembered as the best of French cinema, but Daniel Vigne’s (a French television series director whose credits also include the TV series, “Highlander”) film captures its medieval French setting with stunning results. The rural atmosphere of the 16th Century village is palatable even as digital images. The costumes and sets are so convincing that they’re on the same level as the art direction and costumes in big, expensive Hollywood productions.

The actors all give bravura performances, and even Depardieu, screen hog that he is, is unable to steal the spotlight from his supporting performers, especially Roger Planchon as the justice Jean de Caros and Maurice Barrier as Martin’s uncle. I did, however, find the script a bit soft. Much of the story is told second hand, even some parts that would work better visually, and the romantic center of this film remains unrequited and oblique. But what is on the screen is so well done, so accomplished, and is as mesmerizing as the most intense mysteries and courtroom dramas that you can’t take your eyes off the screen. I recommend this to anyone who doesn’t mind reading subtitles because it’s as good as the best big Hollywood studio dramas.