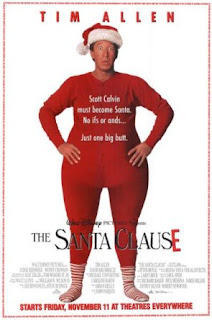 The subject of this movie review is The Santa Clause, a 1994 fantasy film, family comedy, and Christmas movie starring Tim Allen. The film follows a divorced father who must become the new Santa Claus.

Scott Calvin (Tim Allen) is a divorced father who has found that his young son, Charlie (Eric Lloyd), is reluctant want to spend Christmas with him. He’d rather be with his mom, Laura Calvin Miller (Wendy Crewson), and her new husband, Dr. Neal Miller (Judge Reinhold), a psychiatrist and a very good stepfather to Charlie. While Scott and Charlie are spending a dreary Christmas Eve together, Santa Claus arrives, and Scott accidentally kills him. Panicked and encouraged by Charlie, Scott temporarily dons Santa’s suit so that he can deliver the rest of the gifts. The snow really hits the fan when Scott discovers that there is a Santa Clause about putting on the suit. By killing Santa and donning the suit, Scott has magically recruited himself to replace the deceased St. Nick. Although he was a Scrooge, Scott finds himself growing into the role of Father Christmas, but it may cost him his relationship with Charlie.

The first 70 minutes or so of The Santa Clause are brilliant – in a goofy, affable way that makes it a charming, heart-warming, Christmas film. The screenwriters came up with a novel way to juxtapose Scott’s struggle as a father to reconnect with his son Charlie, who is disappointed in him, with Scott’s struggle to live with something he must to accept, The Santa Clause. Fatherhood and career (even one forced on him) clash and blend with surprisingly funny results. In a way, being Santa is the best thing that ever happened to Scott and Charlie’s relationship, but it could also destroy it.

The movie withers when the narrative tries to modernize Santa or rationalize Santa Claus through science, because Santa is magic – pure and simple. For instance, why would Santa need a fire-proof suit when he comes down a chimney because its magic that protects him from fire, not to mention that it’s magic that allows Santa to do his job. The ending is also too long and phony, filled with forced emotion and saccharine level sentiment.

Still, about 80% of the film is an excellent fantasy comedy, and The Santa Clause would probably make any short list as one of the great Christmas comedies. I know that I want to put it on my annual Christmas list.