"Underworld: Awakening" Not Quite Awake 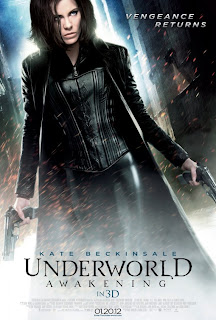 FANTASY/ACTION/HORROR with elements of sci-fi

Six months after the events depicted in Evolution, humans discovered the existence of vampires and Lycans and began a war to eradicate the two races. Selene (Kate Beckinsale), the vampire Death Dealer, was captured and imprisoned in cryogenic suspension (put on ice, so to speak) during this war. She awakens 12 years later and manages to escape from Antigen, the facility where she was imprisoned. Selene has returned to a world that believes that vampires and Lycans are no more, but is this true?

Selene discovers that another test subject escaped from Antigen, a girl named Eve (India Eisley) who has a shocking connection to Selene. Now, the Death Dealer must protect Eve from the head scientist at Antigen, Dr. Jacob Lane (Stephen Rea), who wants to experiment on Eve. Selene allies with a young vampire named David (Theo James), but his father, Thomas (Charles Dance), considers Selene and Eve a danger to his coven. Meanwhile, Detective Sebastian (Michael Ealy), a human, has inadvertently discovered a conspiracy that threatens both humans and vampires.

First, I must admit that Underworld: Awakening is now the least of the four Underworld films. I say “least” instead of “worst” because I like this franchise, and the movie isn’t that bad. Truthfully, though, the first half of Awakening is a disaster; it’s as if a director had a big budget and still produced a cheesy, sci-fi horror flick destined for a Saturday night premiere on the Syfy channel. In the second half, when the screenplay unleashes Selene and allows her to be the ass-kicking Death Dealer we all know and love, then, the film comes to life and manages a decent finish.

Two other things of note: Awakening takes the mayhem and violence of this series to new heights, even for a franchise about werewolves and vampires. There is a level of gore here that will make even some hardened veterans of science fiction/fantasy/horror violence catch their breath. Secondly, the supporting characters are entirely wasted. What is the point of even having Michael Ealy’s Detective Sebastian in the movie; did the producers/studio just want a black guy in the movie? The character is actually good and has potential, but like the others, he is under-utilized.