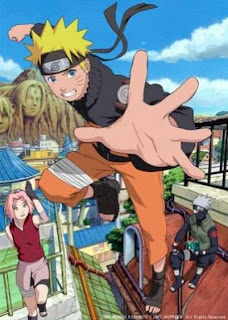 Users of the free, ad-supported Hulu service will also be able to catch the new NARUTO SHIPPUDEN segments one week after their initial run on Hulu Plus; the episodes will also be available on the company’s own VIZAnime.com site.

In the latest NARUTO SHIPPUDEN adventure, Naruto begins his training to control the power of a Tailed Beast with Killer Bee as his new master. In order to do so, one must fight with the Tailed Beast’s head on and absorb its chakra, converting it into one’s own power. Using the key entrusted to him by Jiraiya, Naruto unlocks the seal to release Nine Tails, and the battle between the two begins.

Created by Masashi Kishimoto, NARUTO was first introduced in Weekly Shonen Jump magazine in Japan in 1999 and quickly became that country’s most popular ninja manga targeting tweens and teens. The manga and anime series (NARUTO rated ‘T’ for teens, and NARUTO SHIPPUDEN rated ‘T+’ for older teens), depicting the adventures of ninja-in-training Uzumaki Naruto, is one of VIZ Media’s most successful properties and has captivated millions of fans across the Americas, and Europe The NARUTO and NARUTO SHIPPUDEN animated series are co-productions of TV TOKYO, VIZ Media parent company Shueisha Inc., and Pierrot Co., Ltd.

More information on NARUTO SHIPPUDEN is available at http://www.naruto.com/.
Posted by Leroy Douresseaux at 8:34 AM