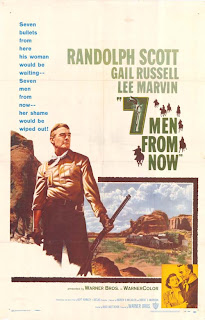 Sometimes a “B” Western (a Western that wasn’t the main feature when it was released) makes such a lasting impression on some of its audience that they never see it as just another movie, and the film takes on a life of its own and never really dies. As time passes, this kind of movie comes to be seen a classic or, in retrospect, a great film. Director Budd Boetticher and writer Burt Kennedy’s Seven Men from Now is that kind of B-movie Western. The film was produced by John Wayne’s production company (Batjac Productions), and The Duke was one of the movie’s producers, although he did not receive a screen credit as a producer.

Ben Stride (Randolph Scott) was a man of the law when he was sheriff of Silver Springs for 12 years until he lost an election. Now, he’s just a man on a mission of revenge – looking for the seven men who robbed the Silver Springs express office. They stole a Well’s Fargo box holding $20,000 in gold and unknowingly killed Stride’s wife. Along his journey to retribution, he encounters and befriends a young Kansas City couple John and Annie Greer (Walter Reed and Gail Russell) who are also heading to Flora Vista, the place where Stride plans to settle scores. The trio eventually crosses paths with a criminal who has a past with Stride, the scoundrel Bill Masters (Lee Marvin) and his partner, Clete (Donald Barry), both of whom may know something about the men who killed Stride’s wife. Things, however, aren’t quite what they seem, and then, there’s the thing about Stride with his eyes on John Greer’s fetching wife, Annie.

The two things that make Seven Men from Now stand out are Budd Boetticher’s direction and Burt Kennedy’s script – in particular their quirky choices that make their film seem different from the standard Western while still looking like a standard Western. Here, Boetticher would focus on the loser in a gunfight instead of the shooter, which makes a duel sudden and jarring. Instead of only being some epic moment in a film, it heightens the sense of danger and gives the audience the idea that in this movie anything goes, which in turn makes the film’s central plotline (the quest for vengeance) an epic contest. This lets the audience know that these proceedings are serious business, and that Seven Men from Now is not just another by-the-numbers gun-slinging cowboy opera.

Boetticher also makes excellent use of the nicely written characters and vivid inter-character dynamics, motivations, and conflicts that Burt Kennedy wrote. Kenney uses a love triangle (John Greer, Annie Greer, and Ben Stride), an old rivalry (Stride and Bill Masters), and personal failure (Stride believing that his pride directly led to the death of his wife) to give Seven Men from Now a sense of drama and purpose that went beyond mere entertainment and into epic storytelling for what is basically a short, feature-length film. Boetticher was also keen on transforming Kennedy’s well-developed characters into players that made each other strong. A strong woman instead of a shrinking violent (Annie Greer) and a wily, eccentric villain who shows no fear of, but has respect for the hero instead of a standard bad guy (Bill Masters) actually makes Ben Stride appear more daring and gallant.

Boetticher also wrangled excellent performances from his cast. Southern gentleman Randolph Scott brings the stoic Ben Stride to life as the quintessential, more-action-than-talk hero. Gail Russell came back from a career beset by alcoholism to transform Annie Greer into a strong pioneer woman, while Walter Reed makes John Greer a genial determined man who is misunderstood by the kind of men who roamed the western outback. Lee Marvin is puckish as the crafty gunslinger manipulating his way to a super fortune in gold.

In Seven Men from Now, the viewer has the privilege of watching how Budd Boetticher employs his cast and transforms a superbly crafted script into an exceptional Western. Seven Men from Now looks like a Western, but it is also a fine drama cast in the Western mold. Too bad it isn’t a little longer.