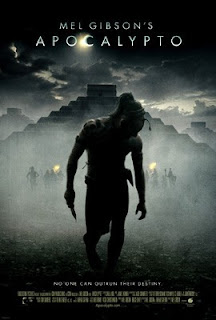 It is the end times of the once-great Mayan Civilization (early 16th century). Jaguar Paw (Rudy Youngblood) is the son of Flint Sky (Morris Bird), the chief of their village, which is deep in the jungle, but no that far away from a large Maya city. Jaguar Paw is a young family man with a wife, Seven (Dalia Hernandez), and a son, Turtles Run (Carlos Emilio Baez), and he has another child on the way.

His idyllic life is shattered when an invading force razes his village, killing many and enslaving the remaining adults. Jaguar Paw manages to hide the pregnant Seven and little Turtles Run before the invaders take him captive. Through a twist of fate, Jaguar Paw manages to escape death, and he makes a desperate break both to save his life and to return home to his wife and son. On his trail, however, is a small band of warriors led by the vengeful Zero Wolf (Raoul Trujillo), and they will chase him through the jungle to the bitter end.

Mel Gibson’s new film, Apocalypto, proves that The Passion of the Christ and his Oscar-winning turn as director for Braveheart are no fluke. Gibson is the consummate director skilled at making bold, visceral, thrilling, and thought-provoking movies, and he is as good as any of the elite directors. That includes directors who were making exhilarating blockbusters before Gibson began directing (Steven Spielberg, George Lucas, James Cameron) and filmmakers who became mega-hit makers after Gibson’s began directing (Peter Jackson, The Wachowski Brothers).

Gibson begins Apocalypto by immersing his audience is a lush, abundant jungle world that quickly becomes a harsh geography of struggle and survival. From brutal village raids to torturous jungle tracks; from a decaying city where mind-numbing human sacrifices take place to a bracing and spine-tingling jungle race for survival: Gibson keeps the viewer on edge and sometimes takes them with him over the abyss where death is quick and relentless and only the stubbornly strong and strongly stubborn can survive.

Gibson achieves this with a cast of novice actors and little known performers – all speaking Maya, yet he gets his cast to make us believe in them. We understand them beyond the language they speak because the actors’ physical performances are so rich and textured. I bought into the idea that I was peeking into an ancient world and that these actors were really the people they were portraying. Rudy Youngblood is all youthful determination as Jaguar Paw, and Raoul Trujillo is riveting as the stout leader and gentle, proud father.

With a highly skilled and brilliant creative team (director of photographer, costume designer, set builders, etc.), Gibson gives his cast a convincingly real ancient world in which to play out their small but compelling drama. This team takes all their skills and talents, and instead of resting on their laurels brings a fictional world to life – a setting fit for a drama that is far beyond the ordinary. As the ringleader, Gibson once again dances with perfection and in Apocalypto makes a film in which any flaws are lost in a damn good time of great cinema and dazzling filmmaking. Some have already called Apocalypto “basically an adventure movie,” and that’s like calling Casablanca basically just a love story, when both are something more.