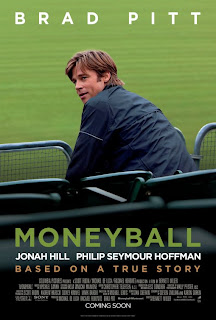 Moneyball is a 2011 sports drama and biographical film starring Brad Pitt. The film is a fictionalized version of events in the 2002 season of the Major League Baseball team, the Oakland Athletics (A’s). Moneyball follows the real-life A’s general manager (GM), Billy Beane, as he uses computer-generated analysis to field (or put together) a competitive and winning baseball team. The Moneyball movie is based on Michael Lewis’ 2003 book of the same name, and Oscar-winner Scott Rudin is also one of the film’s executive producers.

Oakland Athletics’ general manager Billy Beane (Brad Pitt) is upset that his team lost to the New York Yankees during the 2001 playoffs. The end of the 2001 season also means that several of the A’s star players are leaving to sign with other teams for much more money than the A’s are willing to or have the ability to pay. As GM, Beane is constrained by the lowest payroll in baseball, so he needs to find another competitive advantage. Beane meets Peter Brand (Jonah Hill), a young Yale economics graduate with radical ideas about how to assess a baseball player’s value and about how to put a team together. But this new approach is controversial, and as the A’s lose, the pressure mounts on Beane.

Director Bennett Miller (Capote) makes this story work as a film by focusing on Beane, and to a lesser extent Brand. Millers puts Beane’s struggles and the A’s ups and downs side by side. Separately, Beane and the A’s are compelling, but together, their story is exhilarating.

As Billy Beane, Brad Pitt gives one his more unusual performances. To sell this story, Pitt, as the lead character, does not rely on his star power or handsome looks. Indeed, whenever his “muscle-ly” arms make an appearance, they seem out of place. Pitt’s performance is subtle, quiet, and graceful. When Pitt needs to be intense, he is intense, so much so that I could feel it coming off the screen; however, Pitt delivers this intensity in an entirely non-intense way. I believed that Pitt was Billy Beane.

Of all the biographical sports dramas I’ve seen, Moneyball is like no other. This is a baseball movie for baseball people, but this is also a good movie for good movie people.