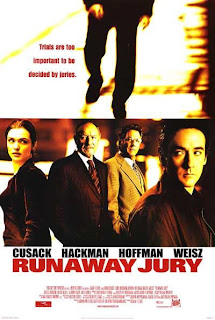 Runaway Jury is a 2003 legal drama/thriller from director Gary Fleder. The film is based on the 1996 novel, The Runaway Jury, by author John Grisham.

Set in New Orleans, Runaway Jury is the story of a mysterious man named Nicholas Easter (John Cusack), who talks his way onto the jury of a landmark civil case against a gun manufacturer and attempts to influence the verdict by manipulating the other jurors. Meanwhile, on the outside, Easter’s girlfriend, Marlee (Rachel Weisz) runs a game to swindle the two lawyers involved in the case into paying her 10 million dollars if they want the verdict friendly to their clients.

Wendell Rohr (Dustin Hoffman) is a torts lawyer who represents the plaintiff, Celeste Wood (Joanna Going), the widow of Jacob Wood (Dylan McDermott), who was killed in a shooting rampage at brokerage firm. She believes the gun manufacturer knew that the killer bought the gun from a store that was careless and ignored gun laws. Rankin Fitch (Gene Hackman) is a jury consultant for the defense. Fitch is almost superhuman in the way he is able to discover the pasts of jurors, examine their beliefs and mindsets, and find out who can be bought, bribed, or blackmailed. His war with Nick Easter and Marlee drives the trial to the brink of ruin for a breathtaking finale.

Runaway Jury is the latest film adapted from a bestseller by John Grisham, author of books such as The Firm and A Time to Kill, both of which were adapted into films. The novel’s original premise was about a civil action against big tobacco, but the gun industry, also a target of big lawsuits, may have seemed like an easier sell to moviegoers, as guns are a lightening rod and divider of the American public. However, the film really doesn’t turn on a change of litigants. The best thing this film has going for it is the trio of John Cusack, Gene Hackman, and Rachel Weisz because they put the drama and thrills in this film. Dustin Hoffman is good, but he seems like the odd man out. His one good chance to chew up the scenery with Hackman is decidedly one-sided with Hackman eating his lunch. Anyone seeing this movie will clearly understand what power Hackman radiates. His star power and acting ability is worlds better than most other actors. An actor in a film with him has got to bring serious game, or Hackman will sweep him away. I so loved Hackman’s performance here that I wanted to have a baby for him.

Parts of Runaway Jury certainly test the bounds of belief and reality, but this is a great legal drama even if stuff happens in this film that no judge would allow to go on in his courtroom. And I say that knowing that most judges ain’t worth crap and are as crooked as a devil in gambling parlor. Runaway Jury is wonderful entertainment, and if you turn your reasoning down a little, it’ll keep you on the edge of your seat.