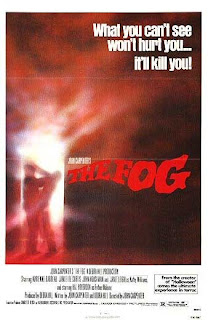 The Fog is a 1980 horror film from director John Carpenter. A ghostly revenge tale, The Fog takes place in town about to be besieged by a strange, glowing fog during its centennial celebration. This film was also remade in 2005.

The small seacoast town of Antonio Bay is celebrating its Centenary, but it doesn’t know that doom is approaching in the form of a strange fog that hides the forms of long-dead denizens of the sea. One hundred years prior, six of the town’s founding fathers reneged on a bargain with a ship’s captain; now, the captain has returned from the deep with his crew to avenge themselves on the descendants. A local disc jockey (Adrienne Barbeau), a sexy drifter (Jamie Lee Curtis), and a fisherman (Tom Atkins) are all that stand between Antonio Bay and ghostly doom.

John Carpenter’s The Fog is a moody, little gem of a horror flick. Carpenter mixed the campfire tale and pulp nonsense with his own unique brand of imaginative madness and created an enduring scary movie. Although the characters are flat and the SFX suspect, the overall package in quite entertaining. I’ve seen this several times, and it always a spine-tingling tale of terror for me. The Fog is no more flawed that the standard horror film, but one glaring weakness is that the end is a bit of a letdown. Still, the film is a nice, creepy ghost story though it lacks the pyrotechnics audiences have come to expect from horror/fantasy films. But it does one thing very well. Like the best ghost stories, it keeps you guessing – wondering what was real or imagined and wondering just when, not if, the ghosts will return.