"Abduction" is a Broken Star Vehicle for Taylor Lautner 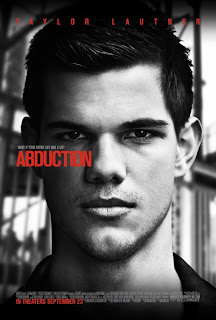 Abduction is a 2011 action thriller starring Taylor Lautner, currently best known for his portrayal of Jacob Black in The Twilight Saga film series. The film is about a teenager who sets out to discover who he really is after discovering a baby picture of himself on a missing persons website. Abduction is also the first feature film that John Singleton has directed in six years.

Nathan Harper (Taylor Lautner) is an ordinary teenager who lives with his parents, Kevin (Jason Isaacs) and Maria (Maria Bello). Nathan partners with longtime friend, Karen Murphy (Lily Collins), for a high school sociology project. One night while doing research on the Internet, Nathan and Karen discover a baby photo that resembles Nathan on a missing persons website.

The website also has an age-progression program that allows users to see what the child would look like when he is older. When he ages the photo of the baby who is named Steven Price, Nathan is shocked to see a picture of someone who looks exactly like he does. Then, an innocent call to that missing persons website leads to the end of the life Nathan knows. Now, he and Karen are on the run, as shadowy figures chase Nathan, insisting that he has information they want. And some of them are willing to kill for it.

Abduction tries to be several things: a suspenseful character drama, an action chase movie, a lost identity mystery, and an international espionage thriller. As any one of the four, the film is weak. As all of them together, Abduction is still weak. The premise: a high school boy discovers his picture on a missing persons website, is interesting and has real-world implications. However, that premise ends up being just a tease because Abduction wants to be an espionage thriller with international implications, but it mostly ends up being a middling action movie.

Taylor Lautner is not a terrible actor, but he doesn’t accomplish much here that would make people think that he is a good actor. Watching this, I could tell that Lautner is sincere and is making an effort to be good and to make people buy into his character and the obstacles and dangers Nathan faces. In the first half of the film, his efforts come across as overacting. In the second half of this film, Lautner really sells, especially when Nathan is forced to directly confront a character that is trying to kill him.

In early 1992, John Singleton earned two Oscar nominations for his debut film, Boyz n the Hood (1991). I am actually saddened that 20 years later, Singleton has directed a film that seems like nothing more than a straight-to-DVD version of The Bourne Identity. Still, I have to give Lautner credit for his efforts, which is why I’m giving Abduction what I consider to be a generous grade.