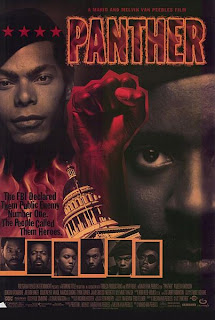 Panther, the film project of father/son filmmakers Melvin (dad) and Mario (son) Van Peebles, is not biopic about the Black Panthers (or The Black Panthers for Self Defense), so much as it, like Oliver Stone’s JFK, myth making, and myths are often based upon real people and actual events. As a side note, Robert De Niro is one of this film’s producers, but he did not receive screen credit.

The Van Peebles tell the story from the point of view of a fictional character named Judge (Kadeem Harrdison). A Vietnam vet attending college in Oakland in 1967, he catches the attention of a slowly growing organization of black men in his neighborhood, The Black Panthers for Self-Defense, who are tired of marching and praying to get the white power structure’s attention to the needs of the black community. They want action, and they want guns to defend themselves. With coaxing from Panther co-leader, Huey Newton (Marcus Chong), Judge joins the group in time to watch it rise and earn the ire of the police and the FBI and fall as cheap drugs pour into Judge’s neighborhood.

Panther is a hodge-podge epic that is part historical drama, part propaganda, part myth, and a little bit documentary. At the time of the film’s release, a lot of critics and “people who were there” were critical of the film’s inaccuracies. But Panther isn’t history so much as it really is myth making. It’s all a matter of perspective, and the filmmakers take a time and a group of people whom they admire and making a rousing historical mini-epic out of that. It’s almost like a comic book in which the Panthers are super heroes fighting super evil cops and corrupt government officials, all of whom are manipulated by malevolent, shadowy figures in Washington D.C.