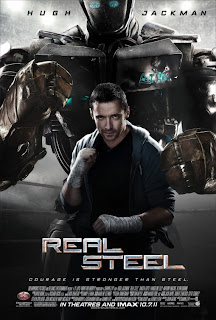 SCI-FI/DRAMA/FAMILY with elements of action and sports

Real Steel is a 2011 science fiction boxing drama from director Shawn Levy (Night at the Museum), and Steven Spielberg and Robert Zemeckis are among this film’s executive producers. Real Steel’s screenplay is based upon Richard Matheson’s short story, “Steel,” which was also adapted into a 1963 episode of The Twilight Zone. Although the film’s boxing sequences offer plenty of action, Real Steel’s heart is a gripping father/son story that will jerk a few tears from some viewers (as it did with me).

The film is set in the near future, the year 2020. By then, robot boxing has replaced human boxing as a top sport. Charles “Charlie” Kenton (Hugh Jackman) is a former boxer turned robot boxing promoter. Charlie’s most recent robot boxer, a robot named “Ambush,” is destroyed in a fight, and his erstwhile partner/girlfriend, Bailey Tallet (Evangeline Lilly), thinks that it is time for Charlie to make a change. Then, Charlie’s life takes a stunning turn. He learns that his ex-girlfriend has died, and that means he must show up in court to decide the custody of his 11-year-old son, Max (Dakota Goyo), whom Charlie has not seen in a decade.

Max’s Aunt Debra (Hope Davis) and her wealthy husband, Marvin (James Rebhorn), want custody of Max, which Charlie is more than happy to give. Charlie makes a $100,000 deal with Marvin that would have Charlie keep Max over the summer. Charlie and his estranged son are at odds; then, Max discovers a second generation robot, called Atom. Suddenly, Max has dreams of the Real Steel Championship, but can an old boxer and an old robot climb up from the bottom of the heap?

I would not describe Real Steel as a robot version of the Oscar-winning film, Rocky, although Atom the robot is also a little guy/underdog in a world of elite boxers. Real Steel is about a father-son conflict, and before there can be hope of reconciliation, the screenplay makes father and son fight their way back to each other. I honestly bought this film’s conceit that Charlie and Max might not ultimately make it. Yes, the loser father reunited with his chip-on-shoulder son has been done to death in Hollywood films, but when done right, as it is here, it seems so fresh and new. Real Steel is exceptionally well-written because it makes the characters really work for that happy ending, while also offering science fiction/action set pieces that had me jumping out of my seat and cheering on the heroes.

Director Shawn Levy gets everything right. The character drama has excellent character and drama, and the sci-fi is fantastic. As the father, Charlie, and as the son, Max, Hugh Jackman and Dakota Goyo, respectively, carry this film in way that seems effortless. They may not be Oscar-worthy, but they’re close. Although I’m a big fan of Hugh Jackman, I ignored Real Steel when it was first released to theatres. I was so wrong, but now I can do right with my Real Steel movie review by recommending it.