"The Tree of Life" is a Spacey Family Odyssey 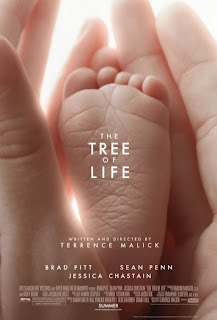 The Tree of Life is a 2011 family drama written and directed by Terrence Malick. In the film, the origin of the universe and life on Earth plays side-by-side with the memories of a middle-aged man having a spiritual crisis.

Jack O’Brien (Sean Penn), an architect, is unhappy, a lost soul in the modern world. While watching the planting of a tree, Jack’s mind drifts through his memories of life as a teenager in the 1950s. His family lived in a sprawling neighborhood in Waco, Texas. There was his father, Mr. O’Brien (Brad Pitt), and his mother, Mrs. O’Brien (Jessica Chastain), and two younger brothers, R.L. (Laramie Eppler) and Steve (Tye Sheridan).

When he reaches adolescence, Young Jack (Hunter McCracken) is faced with a conflict. He must choose between accepting grace or nature, as embodied by each of his parents. Jack’s mother, Mrs. O’Brien believes in grace, which is gentle, nurturing, and authoritative. Mr. O’Brien embodies nature and is strict and authoritarian. Mr. O’Brien, who easily loses his temper, believes that you have to take what you want and also that his wife’s emphasis on love is foolish. Mrs. O’Brien teaches her children that the world is a place of wonder. Through his memories, a kind of trip through time to the past, Jack will try to reconcile his complicated relationship with his father. He also hopes to return something precious that is lost to his mother. Also, various scenes concerning the dawn of the universe and the formation of the Earth play out between scenes of the O’Briens.

In some ways, The Tree of Life is an experimental film, particularly in the way that Malick uses literal visuals in an abstract way to tell a story about the meaning of life and about the reconciliation of parent and child. The juxtaposition of both the universe and Earth’s past and future vividly recall Stanley Kubrick’s 2001: A Space Odyssey. In fact, the way The Tree of Life’s special effects are created (without computer-generated imagery or CGI) is reminiscent of the special effects in 2001.

Malick’s film is both ambitious and humble in that he attempts to encompass all of existence, but channels that through the infinitesimal lives of flawed people. Those characters cannot come up with the big answers, but through love there is reconciliation and, if not answers, then, there is understanding of the relationships most precious to us.

The Tree of Life is an impressionistic story, and the viewer will have to pick and choose through images and colors to decipher the family drama at the center of the film. And this is a real family story, full of startling conflicts and ugly battles. There is, however, convergence and peace and love and beauty. The cast has to receive a lot of credit for their work; these moving, layered performances bring the literal to this often fantastic film. The trio that brings the O’Brien boys to life: Hunter McCracken, Laramie Eppler and Tye Sheridan, gives performances of complexity and profundity that are rarely seen in young actors – even among those that have received Academy Award nominations.

The Tree of Life can be perplexing and achingly slow. Malick also needed to put more emotion on screen and could have made more of the film a conventional narrative. Still, The Tree of Life is moving and deeply spiritual and also more ambitious than most films that star actors of the caliber of Sean Penn and Brad Pitt.