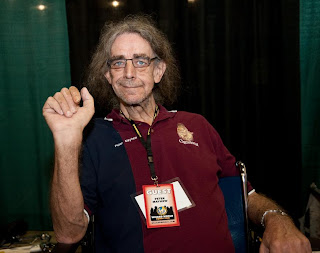 Peter Mayhew, who brought the beloved character “Chewbacca” to life in four STAR WARS films, will attend the 2012 Wizard World New Orleans Comic Con, January 28-29 at the Ernest N. Morial Convention Center. Mayhew, who portrayed the loyal Wookiee in the original trilogy STAR WARS (1977), THE EMPIRE STRIKES BACK (1980), RETURN OF THE JEDI (1983), and the 2005 prequel REVENGE OF THE SITH, will meet fans, pose for photos, sign autographs, and perform a special reading of his latest children's book “My Favorite Giant” during the show.

Mayhew, who stands 7'3", was a hospital worker in his native England when he landed the role of Chewbacca. Between STAR WARS and THE EMPIRE STRIKES BACK, Mayhew worked at Mayday Hospital in suburban London. He resumed this position after EMPIRE, only leaving the hospital again to join his colleagues on the set of RETURN OF THE JEDI. Interestingly, when writer/director George Lucas began searching for a tall actor who could accurately portray Chewbacca, he initially turned to David Prowse. The bodybuilder opted for the part of the sinister Darth Vader, leaving Lucas free to seek out Mayhew for the role of the Wookiee.

Mayhew will read from “My Favorite Giant,” which he co-wrote with his wife Angie Mayhew, on Sunday, Jan. 29, at 1 p.m., in Panel Room A. The book is intended to help little ones understand that being different doesn't have to be a bad thing. The reading is part of full day of kids events on Sunday, which includes a costume contest, mosaic building workshop and a “passport” program in which kids complete activities all over New Orelans Comic Con.

New Orleans Comic Con is the first stop on Wizard World's 2012 North American tour. Hours are Saturday, January 28, 10 a.m. - 7 p.m.; and Sunday, January 29, 10 a.m. - 5 p.m. Tickets are available in advance online at http://www.wizardworldcomiccon.com/neworleans.html at a savings over tickets purchased at the door. Advance adult single-day tickets are priced at $30 ($40 on site); weekend all-session tickets are $45 ($55 on site), and tickets are free for children age 10 and under when accompanied by a paid adult (limit two children per adult). VIP packages with special entry and exclusive items are also available on a limited basis.

Posted by Leroy Douresseaux at 10:04 AM