"Bringing Down the House" Brings Laughs 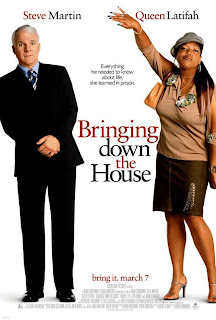 Critics and naysayers have been lying in wait for Bringing Down the House almost immediately after the first trailers and advertisements were aired. A straight-laced, older white man and a down to earth hip hop queen - racism and stereotypes of course – it couldn’t be anything but that. Well, they were wrong.

Peter Sanderson (Steve Martin) is a lonely, divorced, tax attorney who meets Charlene Morton (Queen Latifah) in an online chat room. He assumes she’s a young, curvaceous blond, but she’s actually an African American prison inmate, which he discovers when she shows up on his doorstep one, fine evening. Charlene wants Peter’s help to clear her of a crime she says she didn’t commit, but his life is already complicated by mild turmoil. He misses his ex-wife Kate (Jean Smart) and their two children, Sarah (Kimberly J. Brown) and Gregory (Angus T. Jones). His bosses at his high-pressure job have given him the assignment of bringing a frugal heiress’s (Joan Plowright) billion-dollar account to the company. To make matter worse, the FBI is searching for Charlene, as is her creepy boyfriend (Steve Harris), and Peter’s friend Howie (Eugene Levy) really has a jones for Charlene.

First, I should say that Bringing Down the House is hilarious, laugh out loud, knee-slapping funny. It’s the best comedy I’ve seen a long time, and I haven’t laughed, really laughed, at a movie in a while. I could call Bringing a “feel good” movie because it made me feel good. Looking at the poster and seeing commercials for the film might give people the idea that this is an un-politically correct film in a PC age, but it really is about making new friends, people with different social and economic backgrounds. If that sounds a little high brow, it might be, but it’s the long way around saying that birds of different feathers can flock together.

As for as the it’s politics, you have to watch the film really close to notice something I think becomes obvious half way through the picture. The film parodies the stereotypical portrayal in popular culture of white people’s stereotypical reactions to black people. It’s not making fun of black people; it’s poking fun of the way whites are played as sheltered nerds who only know a skewered version of black culture.

Queen Latifah’s character Charlene is actually well rounded, and Latifah plays her as a brassy, self-reliant, never-say-die woman who takes the initiative to defend herself. What you see is what you get, and Charlene is certainly not one of those women of ill repute who actually has a heart of gold. Latifah takes her character seriously and plays her with a sense of humor. Charlene, though loud and confident, is sensitive and doesn’t look out for her own interests without regards for other people.

Martin could make a career out of playing the odd straight man to black comedians; he worked quite well with Eddie Murphy in Bowfinger. His chemistry with Latifah is as good as or better than the chemistry between him and his white co-stars. He gives Peter a dual edge; you can laugh at him and with him, and you care about him. And if you’ve seen the part of the ad that shows Martin in a black club thuggin’ it out while wearing “street” gear, do know that it’s damned funny and not stereotypical. In fact, he plays the scene as a white guy who likes hip hop and hanging out with black people instead of playing it as a naïve white guy with a stereotypical idea of how to be “black.”

But to heck with all the social politics. This is a funny movie. It lags at the end as it tries to tie everything up for a feel good end, and there were some good characters that would have made this movie even funnier if they had a little more screen time. However, I give Peter Filardi credit for writing a funny movie that gives the finger to its critics. Martin, Queen Latifah, and the rest of the cast put on a good show, not a coon show. To miss this is to miss a rare treat, a film that makes you laugh and feel so good that you probably wouldn’t mind seeing it again.