The Ides of March movie review 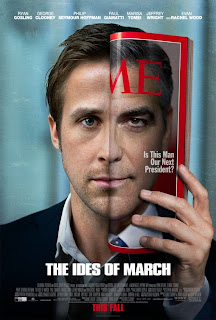 DRAMA/POLITICS with elements of a thriller

The Ides of March is a 2011 political drama directed by George Clooney. The film is based on the 2008 play, Farragut North, by Beau Willimon, who also co-wrote the screenplay for this film adaptation. Leonardo DiCaprio is one of the film’s executive producers, and his production company, Appian Way Productions, is one of this film’s financial backers. The Ides of March is kind of a thriller, but it doesn’t really work as a thriller. The best moments are when the film puts two characters together in a clash or test of wills.

The film focuses on Stephen Meyers (Ryan Gosling), the Junior Campaign Manager for a Democratic presidential candidate, Governor Mike Morris (George Clooney). Morris’ campaign is competing in the Democratic primary, and the latest battleground is the state of Ohio, where Morris battles the other Democratic presidential candidate, Arkansas Senator Ted Pullman. Both campaigns are also attempting to win the endorsement of U.S. Senator Franklin Thompson (Jeffrey Wright), D-North Carolina.

Meyers is doing well at his job, but he gets involved in two troublesome situations. First, he holds a secret meeting with Pullman’s Campaign Manager, Tom Duffy (Paul Giamatti). Then, he becomes embroiled in drama with a Morris campaign intern, Molly Stearns (Evan Rachel Wood). One entanglement could ruin Meyers, but the other has the potential to destroy the Morris campaign.

The Ides of March feels restrained to me. The entire movie simmers like a dish that needs to boil-over, but doesn’t know how or when to do it. The best moments in the film are when two characters clash. The best confrontations feature Meyers and Senior Campaign Manager Paul Zara (Philip Seymour Hoffman) or Meyers and Molly Stearns. There is one major test of wills between Meyers and his boss, Mike Morris (who is Governor of Pennsylvania), and another between Meyers and Sen. Thompson. Both occur in the film’s last act, but these moments made me realize that this movie should have had more scenes featuring Meyers, Morris, and Thompson in some combination. It is as if the best stuff is happening off-camera.

Honestly, I can recommend The Ides of March to people that enjoy watching particular members of this cast act in dramas, especially Gosling and Clooney. I think people who like political dramas will like this, although they should not expect this to be humorous or satirical (at least not in an obvious way). Although it has an electrifying second half, The Ides of March isn’t as good or as visceral as it could be.