"Don't Be Afraid of the Dark" More Fantasy Than Horror 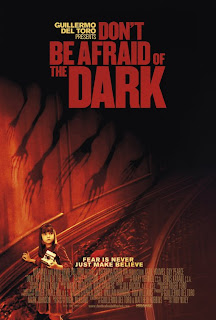 Don’t Be Afraid of the Dark is a 2011 dark fantasy film, and it is also a remake of a 1973 ABC made-for-television horror movie of the same name. Co-written and co-produced by Guillermo del Toro, the new Don’t Be Afraid of the Dark is sort of a cross between a horror film and a scary movie for kids. It is certainly an atmospheric film, but it is never truly scary as it could be.

Although she wishes she didn’t have to do so, 8-year-old Sally Hirst (Bailee Madison) arrives in Rhode Island to live with her father, Alex Hirst (Guy Pearce), and his girlfriend, Kim (Katie Holmes). Alex and Kim are living in Blackwood Manor, the former home of the late renowned painter, Lord Blackwood. The couple is also restoring the manor in order to put it back on the market for sale.

Not long after moving in, Sally begins to hear strange, small voices in the walls of the manor. She even discovers that the mansion has a long-hidden basement where Lord Blackwood once worked. There, Sally opens an old fireplace and unleashes creatures that want to claim her as one of their own.

Don’t Be Afraid of the Dark features a theme familiar to horror films – how often victims go unheard or ignored. With that in mind, Sally Hirst is ostensibly the lead character, and she should be both protagonist and hero. However, the screenplay doesn’t mind telling a story of a small child being menaced, but the writers seem to blanch at the idea of that same small child fighting back.

Don’t Be Afraid of the Dark also juxtaposes fantasy and horror, and ultimately comes across as a really scary fairy tale. Because so much about the creatures, the film’s adversaries, remains in the dark, however, the movie isn’t as scary as it could be. In the bid to remain mysterious and secretive, the film, instead, views like a slice from a larger and far more interesting story. It doesn’t help that the creatures often look like bad CGI creations, which makes some of the sequences in which they attack seem more comical than scary. I could not help but feel disappointed in them; it is a vague disappointment, but still a feeling of discontent.

I still like that Don’t Be Afraid of the Dark has imagination, and the art direction and sets are museum-worthy. The photography by Oliver Stapleton is perfect for fantasy and horror and also resembles the work Guillermo del Toro’s frequent collaborator, cinematographer Guillermo Navarro. To be honest, I’d take Don’t Be Afraid of the Dark’s imperfection over other films’ perfection.