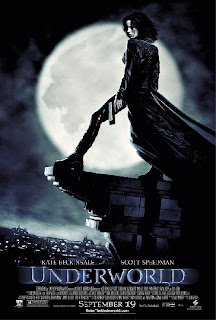 Underworld is a 2003 action/fantasy film about a war between vampires and werewolves (called Lycans). I believe that this film exists in a fantasy world that looks so good and convincing on screen because of modern cinematic technology.

Quite a few people have come to believe that computers generated special effects have elevated what was once traditional Hollywood B-movie material (science fiction, fantasy, horror, etc.) to A-list status. Once upon a time quality story telling was king because even the best that special effects could do no more than make an obviously fake flying saucer look like an obviously fake flying saucer. Now, special effects can convincingly create fantastic worlds, outlandish creatures, and bizarre scenarios. A plain old movie drama pales next to some two-and-a-half hour vampire, car chase, kung fu, and alien invasion action movie.

I’d like to believe that Underworld, with its straight-forward tale about a centuries-long blood feud between werewolves and vampires, could still be very entertaining without the aid of computer generated effects (CGI) or any kind of SFX, for that matter. There’s no doubt that the movie proudly wears its B-movie heritage on its sleeve, and the creators sold the studio on the movie by pitching the idea, “Romeo and Juliet with vampires and werewolves.” Truthfully, very little about Underworld vampire/werewolf conflict makes much sense. The feud only seems a reason for Vampires to walk around in fancy and expensive leather gear and shoot hundreds of rounds of ammunitions. For the werewolves, or Lycans as they called in this film, the conflict gives them a reason to hide in the city’s underbelly, crawling around like low-rent thugs and thieves and engage in homoerotic intra clan feuds, as there are apparently no female Lycans.

Selene (Kate Beckinsale) is a death dealer, a Vampire warrior who hunts the Lycans. The Lycans were supposed to be on the run ever since their great leader Lucian (Michael Sheen) was killed six centuries prior, but the war never ended. Selene’s people are clan of secretive, modern sophisticates, as much dilettantes as they are vampires, and she alone seems to hold a hard line against the Lycans. Now, Selene has found the werewolves tracking a handsome young human man named Michael Corvin (Scott Speedman), and she is determined to discover why, even as she suspects her clan leader Kraven (Shane Brolly) is involved in a great conspiracy that could endanger all of her kind.

Visually, Underworld resembles The Matrix films, and stylistically the story is quite similar to the Blade films (maybe even a bit of The Crow), but director Len Wiseman and his cohorts create their own crazy dish from the various sources they raided to concoct Underworld. It’s by no means a great movie, and the acting is as much unintentionally funny as it is dreadfully serious. It’s oh-so-dark and oh-so-seriously gothic and Goth, and the dialogue is so stiff and formal that I can almost swear that no character spoke one word of contraction.

Still, though this film is ponderous and painfully derivative, I couldn’t take my eyes off it. I found Underworld to be quite good, and I’ll see it again. I can’t imagine that many fans of genre films would not see it, though many may actually not like it. For me, it’s one of those “ultimate” popcorn flicks – horror, fantasy, and action all put together and filmed as if it were a very, very, very long music video. It’s gloriously and hilariously dark eye candy for the comic book and sci-fi geeks. The nitpicker in me might sneer, but the film geek in me wants more. I’ll take it warts and all.