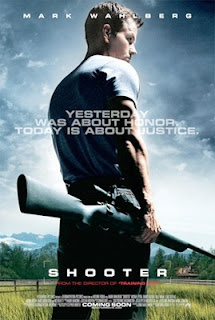 Academy Award-nominated actor Mark Wahlberg (The Departed) joins Antoine Fuqua, the director of Training Day and Tears of the Sun, for the film, Shooter, a razor sharp action/thriller about an honorable man framed as an assassin.

After a mission in Ethiopia goes badly, Marine Corps scout sniper, Bob Lee Swagger (Mark Wahlberg), walks away from the Corps for what he sees as a devastating betrayal. He moves to a remote mountain cabin and leaves the world behind, except for his loyal dog. One day, Colonel Isaac Johnson (Danny Glover) comes calling and tells Swagger that his country desperately needs him to help Col. Johnson foil an assassination attempt on the President of the United States. Johnson tries to convince Swagger that only his lethal skills and expertise in long-range ballistics can help stop the assassin.

Johnson appeals to Swagger’s sense of patriotism, and he decides to do this "one last time" thing. After this new mission goes badly and the mystery assassin gets off a shot, Swagger becomes a hunted man, and he has to uncover a dark conspiracy in the heart of the American government in order to clear his name. Swagger will have to discover who the real hit men are, but he’ll have to hit them before they hit him.

A mixture of the Matt Damon “Jason Bourne” films (The Bourne Identity) and the Harrison Ford-led “Jack Ryan” films, in particularly, Clear and Present Danger, Shooter is a slick, fast-paced film that draws the viewer in at the very beginning and holds him or her in a vice like grip until the picture fades to black. Shooter isn’t as smart as the recent The Bourne Ultimatum, nor is it really an insider/conspiracy movie like Clear and Present Danger. Shooter is the good old boy, ass-kickin’ version of those films – smart, tough, but most of all street savvy.

The performances are good, and Wahlberg, a former Top 40 rapper and pretty boy underwear model, has turned out to be a strong actor who is authentic in very masculine roles. In other words, he’s plays the don’t-mess-with-him badass very well. Some of the credit for Shooter’s success must also go to Antoine Fuqua. He does movies featuring men with guns and films featuring combat and the military very well. One can say he’s almost an artist with these types of movies, and Shooter is his most polished effort yet, and a damn enjoyable movie about men who are super good at shooting super guns.