"Bend it Like Beckham" is Something Different and Nice 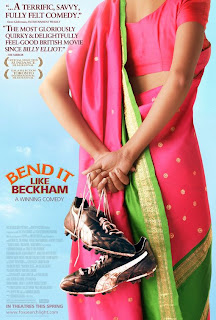 Bend it Like Beckham is a 2002 comedy/drama and sports movie from director Gurinder Chadha. The film is set in West London and focuses on a young woman who rebels against her orthodox Sikh parents to join a football (soccer) team.

If you’ve never heard of David Beckham, the “Beckham” in Bend it Like Beckham, that’s okay. He’s currently the world’s most famous soccer player or footballer, and soccer still has a long way to go in the States. Still, Beckham, the movie about a young woman who battles her parents Old World ways to forge her own future is not only a really good “feel good” film, but also unique because it’s Asian/Sikh cast makes it very different from the all-white family films that we usually get.

Jesminder Bhamra or Jess (Parminder K. Nagra), who has loved soccer since she was a little girl, gets an offer from her new friend Juliette Paxton (Keira Knightley) to join an girls soccer team that is part of an all-female team. Jess’s parents, Mr. and Mrs. Bhamra (Anupam Kher and Shaheen Kahn) detest their daughter’s interest in soccer although she excels at it, seeing it as an affront to their orthodox Sikh ways, especially as their daughter Pinky’s (Archie Punjabi) wedding day approaches. Jess, however, rebels against them; she concocts elaborate lies that usually fall apart, but her biggest sin is when she joins her team for a big tournament in Germany.

Although the story touches on a number of family issues, including obligation and tradition, the script approaches ideas as frivolously as a sitcom. There is a serious clash of cultures going on here, and although the film is a laundry list of conflicts, the screenwriters never treat any of it seriously. For instance, during a soccer match, an opponent throws Jess to the ground and calls her a “paki,” which is a sadly popular ethnic slur against many Asians in England. When Jess retaliates, the referee throws her out of the game, but not the bigoted ho. This directly ties into the experiences Mr. Bhamra had when he moved to England, but the director brushes past the trauma of racism and just moves onto the next funny scene.

Bend it Like Beckham is light, frothy entertainment. It is funny, and though a bit of a chill tempers its warmth, I credit it for being quite entertaining in spite of a few warts.