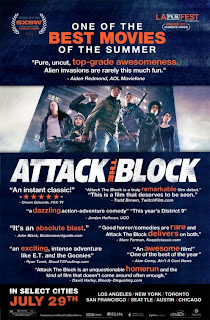 Attack the Block is a 2011 British alien invasion movie and science fiction comedy. Written and directed by English comedian Joe Cornish, the film follows the members of a South London street gang who defend their block from an alien invasion. Edgar Wright of Shaun of the Dead fame is one of the film’s executive producers.

Attack the Block opens on Bonfire Night (also known as Guy Fawkes Night) in South London. While walking home, a young nurse named Sam (Jodie Whittaker) is mugged by a gang of teenage boys and their leader, the sullen Moses (John Boyega). The attack on Sam is interrupted when an object falls from the sky and smashes into a nearby car. While Sam escapes, the boys investigate the object and find a small, strange creature which attacks them.

After killing it, Moses and the boys hope to gain fame and profit from the creature. However, more objects like the first are falling from the sky, and the creatures that emerge from them are larger and more vicious that the first creature. Now, Moses and friends have to protect their block, Wyndham Towers, from alien jaws of death.

Early in my viewing of Attack the Block, I thought of J.J. Abrams’ Summer 2011 movie Super 8, which I liked but found to be an under-achiever. Attack the Block is the imaginative, socially conscious, and fun teens vs. alien invaders film that the too-serious Super 8 could have been. While Super 8 can come across as Abrams’ Steve Spielberg masturbation fantasy, Attack the Block is Joe Cornish’s imaginative and inventive fantasy. This is a small science fiction movie that stands tall next to the big boys of 2011’s slate of science fiction and action films (Green Lantern, Super 8, Transformers: Dark of the Moon, etc.).

There are many reasons for Attack the Block’s success. One is the simple, uncomplicated creature effects. The alien monsters look like guys in gorilla suits that have a luminescent set of choppers, yet they are effectively scary. I think these monsters should make more film appearances.

Two other reasons for this film’s success are the performances and the character development. First, let me say that it is cool and makes me ecstatically happy that most of the main characters in a science fiction movie are “lower class” black teens. What is even better is that Cornish’s script delves into them, especially Moses, whom Cornish grows as a character from the beginning to the end of the story. Of course, John Boyega’s quietly potent, still-wet-behind-the-ears turn as Moses is the key reason the character rises in stature. However, Cornish sadly under-utilizes Sam, who comes across as an intriguing player from the start of the film.

Posted by Leroy Douresseaux at 11:08 AM