"The Fog" Remake Lost in a Fog 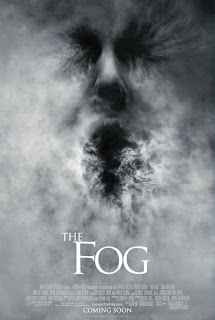 HORROR/THRILLER/MYSTERY with elements of fantasy

In the new horror flick, The Fog, Antonio Bay, a small community on Antonio Island, is about to celebrate the dedication of a monument to its four founding fathers. However, a thick fog, with seemingly mystical powers, engulfs the seaside town bringing with it a curse tied to the founding of Antonio Bay. Nick Castle (Tom Welling, Clark Kent of “Smallville”) and his girlfriend, Elizabeth Williams (Maggie Grace), must solve the mystery of the fog and the malevolent, vengeful spirits it hides if they are going to save Antonio Bay.

Apparently, famed horror movie director John Carpenter (Halloween, Ghosts of Mars) currently struggles to get financing in order to make new films. The irony of this is that 2005 has seen the release of two remakes of earlier films. In January, audiences got an interesting re-imagining of Carpenter’s Assault on Precinct 13, and now two weeks before Halloween, we get a remake of Carpenter’s well-regarded 1980 film, The Fog. This new film has a bigger budget and something else that the original film didn’t have, computer generated special effects. The result is an entertaining ghost story/thriller that is the fast food equivalent of a horror movie – a favorable respite one is just as likely to forget as to remember.

The film has something absolutely necessary for even a half-decent horror flick, creepy atmosphere, and on a few occasions in the film, that creepy atmosphere can be described by using phrases like “heart pounding” and “spine-tingling.” The film’s problems are the directing, script, and cast. The Fog drags and lists like director Rupert Wainwright’s previous effort at making a mediocre horror film, Stigmata (1999). One has to wonder what Wainwright did to get the assignment to direct this film. The only thing that he has directed since Stigmata is a failed TV series, “Wolf Lake,” in 2001. His claim to fame before Stigmata was directing seminal rap group N.W.A.’s video for “Straight Outta Compton” and directing videos for MC Hammer. You don’t need a cooking school graduate to make Big Mac’s, so the producers or the studio might as well have hired a film school student and given him class credit to make the same run-of-the-mill scary movie that Wainwright did.

The script is a re-imagining if one considers arbitrarily making changes to the source material as a sign of imagination; in fact, most of what is changed from the original film seems to have been done for the sake of change or because it, when combined with CGI, would make a cool scene, although cool doesn’t equal logical here. The characters are underdeveloped and treated in such an offhanded way that they don’t even make sympathetic victims. There is so little to so many of the characters that literally every one except maybe three seems like extras.

The cast leaves something to be desired. Tom Welling is sort of a cute beau-hunk, but his acting talent only goes as far as the material. He doesn’t have the chops to rise above the watery tale Cooper Layne wrote for this film. Maggie Grace is good at showing anxiety or pouting on cue when another character is so unfair to hers; that’s pretty much what she does on the hit TV show, “Lost,” and it serves her well here. DeRay Davis’ Spooner is a token; I don’t think the studio and filmmakers fooled the audience in that regard. Spooner has one really great line near the end of the film, and gets a few chuckles early in the flick. Lately, horror movies have become just like The WB TV network – all white, as in television shows full of pretty young white actors.

The Fog 2005 will make a fine cheesy horror rental. Unlike 2005’s Boogeyman, The Fog 2005 doesn’t totally screw up the excellent frightful atmosphere it establishes in the first act with a dreadful second and third act. Even Wainwright, Layne, and a weak cast can’t take the bite out of a ghost story that mixes in the mysteries of the deep seas. Try as they might, incompetence and mediocrity can’t outright destroy one of horror master John Carpenter’s better blueprints.