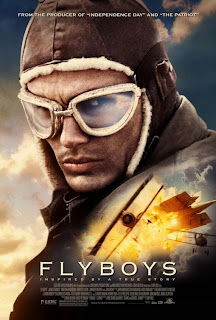 Flyboys is the epic World War I drama from Oscar-winner Tony Bill (which he won for producing The Sting) that tells the true story of the Lafayette Escadrille. Before the United States’ official entry into the war (1917), the Allied powers of England, France, and Italy were losing to the German military juggernaut. Many young Americans volunteered to fight for the French; some served in the infantry and others in the Ambulance Corps. The Lafayette Escadrille were the young men who wanted to be pilots. Flyboys is based upon this true story, and the film’s characters are based directly upon real men or are composites of the historical figures.

The story focuses on bankrupt farm boy, Blaine Rawlings (James Franco), who joins the Escadrille and finds himself chafing under the discipline of learning to be a pilot. Briggs Lowry (Tyler Labine) is bullied by his father into joining. Black American Eugene Skinner (Abdul Salis) is an American expatriate boxing in France when he decides to serve France as a thank you for being more racially tolerant than his birth country.

Under the guidance of the weary French Captain Thenault (Jean Reno) and the leadership of American veteran, Reed Cassidy (Martin Henderson), these young men take to the sky to face the formidable German flying armada. They fly newly invented and mechanically imperfect aircraft, but the men of the Escadrille find themselves having the kind of adventure they never imagined. Rawlings also finds time to romance Lucienne (Jennifer Decker), a young Frenchwoman who lives in a nearby town.

In this movie, the drama is simple TV movie quality melodrama, and not the kind one might get from a well-written and directed television movie. The character moments often seem like filler, and director Tony Bills just rushes the characters through scenes of intimacy and bonding. That’s why half the time the romance between Rawlings and Lucienne seems forced, and the scenes between Rawlings and Capt. Thenault are sadly thin, lacking the power relationships between soldiers in war movies generally have. Even camaraderie between the members of the Escadrille is underdeveloped, which is sad because there are so many scenes that only hint at how good this subplot of the movie could be (although there is a great moment between Lowry and Skinner about what their fathers did for a living).

Over a stirring score by Trevor Rabin, the cool and terrific aerial combat scenes make (and save) this movie. Dogfights, duels, and even a kind of jousting in the sky: they rouse you from the slumber the rest of this movie induces. It’s obvious that computers were used to create these scenes, but Tony Bill uses these scenes to bring out the humanity of his characters. It is in the sky that Bill allows the actors to develop the characters and give us reason to invest in them. Flyboys may not make serious movie lovers forget about classic World War I films, but it is in those dogfights in the sky where the director, his cast, and creative crew find the heart of Flyboys and leave the viewer delighted.