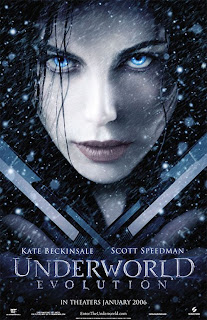 FANTASY/ACTION/HORROR with elements of sci-fi

After the chaos at the end of Underworld, the war between the vampires and the lycans (werewolves) has taken a backseat to unlocking the secrets to the beginnings of the ancient feud. Vampire heroine, Selene (Kate Beckinsale), a Death Dealer (one who hunts lycans), and Michael Corvin (Scott Speedman), the human who became a lycan/vampire hybrid, have found their quest to unlock the secrets of their bloodlines hampered by the reawakening of Marcus (Tony Curran), the first vampire – also a powerful hybrid.

Marcus is hunting for the crypt where his brother William, the first werewolf, has been imprisoned for eight centuries. That also means Marcus must uncover the machinations of Viktor (Bill Nighy), the vampire lord who imprisoned William and who was killed at the end of the first film. [Viktor only appears in this film via flashbacks). Marcus is willing to kill anyone who stands in his way, including Selene, Michael… and Alexander Corvinus (Derek Jacobi), who is Marcus and William’s father and the man who was the first immortal.

Underworld: Evolution, as a sequel, is like Superman II to Superman and Star Trek 2: The Wrath of Kahn to Star Trek: The Motion Picture, more kick-ass than the original. I would call Evolution better than its predecessor. Although this film is even more of an action flick than the first, the two films are different. Whereas the first could be seen as some kind of riff on the Blade films with a twist of Goth style and music video cool, Underworld: Evolution has the explosiveness of a Lethal Weapon movie or a Michael Bay film (say, The Rock or Bad Boys II). It’s a fantasy mini-epic, but more video game fantasy than Tolkien.

The acting is as good as before. Kate Beckinsale is as magnetic and as alluring as the sexist action babe or femme fatale, and she can give a beat down that would make Charles Bronson proud. Scott Speedman is a solid leading man, and he plays second fiddle to Ms. Beckinsale without disappearing; he actually makes us miss him when he’s off screen. The music is better, and there is a nice addition to the costumes in the form of the vampire war armor. The film’s hues are warmer than in the first film – the better to fit Evolution’s hot passions and blood feuds.

But the architects of the film’s success remain director Len Wiseman and screenwriter Danny McBride; they seem to hit all the right notes. Here, it’s the fabulous and intricate back-story of the vampires and lycans that engages the viewer as much as the visual pyrotechnics and theatrics that Wiseman pumps into the film. If there is any reason for this franchise to continue, it’s certainly to see the twists, turns, and surprises that McBride and Wiseman may have in store. In the meantime, Underworld: Evolution simultaneously satisfies and whets the appetite. It will only take a few minutes of this excellent entertainment to make the viewer want to invest himself in the wild ride.