"Underworld: Rise of the Lycans" Rises on Its Own 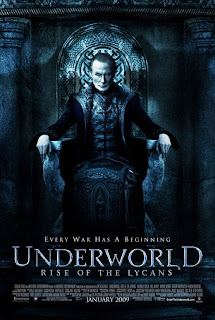 Rise of the Lycans opens in the Dark Ages of Europe. Viktor (Bill Nighy) is the ruthless elder lord of a vampire coven. Human nobles pay him to protect them from the ravenous, uncontrollable werewolves that are unable to return to their original human form. One day, a female werewolf gives birth to human child who grows up to be Lucian (Michael Sheen), the first werewolf able to take human form. Viktor uses Lucian to create a new breed of werewolf that can keep guard over the coven during the daylight hours, a breed Viktor calls “Lycans.”

Lucian and Viktor’s daughter, Sonja (Rhona Mitra), are in a relationship that they struggle to keep hidden. Lucian also begins to struggle with the way Viktor and the other vampires treat his werewolf brothers. After he encounters Raze (Kevin Grevioux), a brave human destined to be turned into a werewolf, Lucian is inspired to plot a revolution. Love and revolution, however, may cost Lucian and Sonja everything.

Underworld: Rise of the Lycans is essentially a stand alone film. One need not have seen the first two films in order to enjoy Rise of the Lycans. In a way, this film’s story is like an aristocratic melodrama in which a noble lord’s precious daughter has a forbidden romance with the help or, in this case, a werewolf slave. This movie is as much about its themes of mixed race romance, racism, discrimination, and exploitation as it is about the tropes of modern vampire versus werewolf fiction. That makes Rise of the Lycans different from the other Underworld films, but not necessarily inferior, although I do think that it is the least of the three in terms of quality.

As a big fan of the series, I can say that I liked Underworld: Rise of the Lycans, and Michael Sheen’s vigorous and physical performance gives the film much dramatic credibility. Rhona Mitra and the reliable Bill Nighy also deliver sturdy performances. Director Patrick Tatopoulos is straight-forward, seeming to care more about the film than showing off to prove what a hotshot fantasy film director he is.