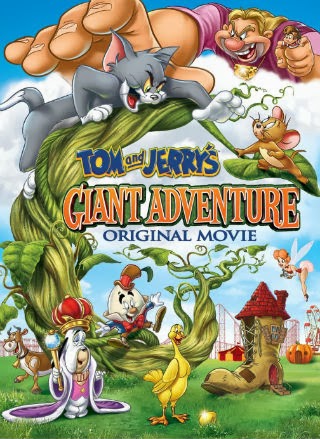 Once upon a time, Joe Bradley opened Storybook Town, a fairy tale-inspired theme park.  “Where dreams come true if you believe” became Bradley’s motto for the park.  He shared his dream with his wife, Violet (Grey DeLisle), and eventually with their son, Jack (Jacob Bertrand).  After Joe died, however, Storybook Town fell on hard times.

Now, Tom and Jerry are the last animals living in Storybook Town, but they are faithful servants of Jack.  The boy and his mother are desperate to save the park from the machinations of Mr. Bigley (Tom Wilson), a greedy billionaire and owner of Bigley’s Super Strip Malls.  Bigley wants to demolish Storybook Town and turn the property into a strip mall (what else?).

Jack believes some mysterious magical beans will help him save the park, but all they do is take him and Tom and Jerry to Fairyland.  There, the trio discovers that its denizens are also under the boot of a greedy bully, a giant named Mr. Ginormous (Tom Wilson).  Can Tom and Jerry stop their feuding long enough to join Jack in his bid to help the people of Fairyland and to maybe save Storybook Town?

Tom and Jerry’s Giant Adventure starts off a bit melancholy, with its themes of death, decay, and poverty.  Plus, the story’s allusions to Walt Disney and Disneyland are a little off-putting – to me, at least.  Is this an homage or sly dig?  However, once the story gains a clear sense of purpose and the heroes have a goal (or goals), the movie becomes a bright adventure that radiates with hope.

As for as the production values, the animation is on par with recent Tom and Jerry films, but the art direction is not special.  The character animation on Mr. Ginormous is the standout in this movie.

A number of Tom and Jerry’s fellow MGM animated characters make their usual appearances:  Droopy Dog (Joe Alaskey), Barney Bear (Richard McGonagle), Screwy Squirrel (Paul Reubens), Spyke and Tyke (Phil LaMarr), etc.  I must say that these are not the best versions of the characters, and they have been put to better use in other Tom and Jerry flicks.  The classic MGM sexpot character, “Red,” appears in this movie as Red Fairy (Grey DeLisle), but she is a tepid version of her red-hot self, but still manages to be a little risqué.  Radio legend and spoken word artist, Garrison Keillor, gives voice to the character, Farmer O’Dell.  I can’t say that his performance does anything particularly special for this film, but Keillor’s presence does strike an odd note.

Strangely, the thing that really appeals to me is this film’s sense of hope and perseverance.  In Tom and Jerry’s Giant Adventure, there is the sparkle of magic to go with the movie’s spark of hope.  I found myself really believing in miracles, and for me, that makes what could have been an average movie a little special.


Posted by Leroy Douresseaux at 9:03 AM